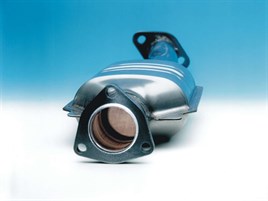 A Leeds manufacturing company has designed and built a new alarm system to combat the growing problem of catalytic converter theft.

The ProCatt 3 is Thatcham-accredited and is fitted to the exhaust with two detection sensors which are activated when an attempt is made to remove the converter. A bonnet alarm ensures no access can be gained to the engine compartment. The alarm is powered from the vehicle battery but it also includes its own battery backup.

The alarm has visible warning lights in the cabin so drivers or dealers know when an attack has taken place.

The theft of catalytic converters from the exhaust systems of vehicles occurs as they contain a small amount of precious metals that are used to remove hazardous gases. They are then sold on for up to £200.

John Hicken, the product development director of Secure Micro Solutions (SMS), the Leeds  company behind the new alarm system, said: “We were aware of the growing theft of catalytic converters from vehicles and the significant inconvenience and cost that this causes drivers, and wanted to produce an alarm system that would withstand an attack and ward off thieves.

“A vehicle off the road is a vehicle that is costing money and whether you are a large fleet owner or a self-employed individual this is time and money you can little afford.

“Down-time for repairs, liaising with insurance companies and potential loss of no claims caused by the theft of catalytic converters can be a major headache and expensive.”