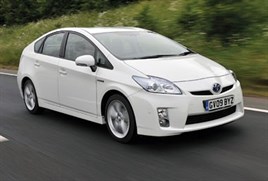 In Glass’s top 10 of the fastest selling used cars for September, are the Toyota Prius (pictured), which holds the top spot for the second month in a row, the Honda Insight in third and at number eight is the Lexus RX. Glass’s believes it has achieved this position largely through sales of the hybrid version.

Glass’s head of valuations Rupert Pontin, said: “It will be interesting to see whether this situation continues over the coming months. The success of the Prius certainly highlights the value-for-money status of this model and reiterates the importance of low running costs to second-hand car buyers.”

Buying patterns of cost-conscious families, out in force this September, has placed two family-friendly Vauxhall MPVs in the top 10.

Pontin said the Zafira and Meriva now represent excellent value for money. He describes the Mazda CX-5, at number 10, as “competent and often underrated”.

“Retail buyers have at last seen the appeal of this crossover SUV, but generally speaking these are in short supply.”

For the first time in many months, Mercedes-Benz had no products in the bottom 10 sellers, and in fact none in the bottom 20. Rupert Pontin suggests this could be indicative of the current feel-good factor for this brand.

Three upper medium models are in the second, third and fourth places from bottom, namely the Subaru Legacy, Seat Toledo and Subaru Outback.

“This perhaps signifies the apathy from the retail buyer for this sector of the market.”

One surprise among the slowest sellers is Renault’s Kangoo, which has historically proven to be desirable due to its spacious design and individual appearance coupled with a competitive price.

The slowest seller of all is the Renault Scenic, which has been gradually moving towards this position. Pontin said: “Despite great interior space, a high driving position and potentially economical engines, poor reliability and build quality have driven this model to the bottom spot.”