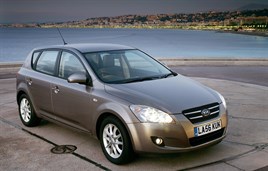 The first Kia models are starting to reach the end of their seven year warranty following the brand’s launch of the European designed Cee’d in 2007.

Paul Philpott, president and chief executive of Kia Motors (UK), said: "When we announced the warranty on Cee'ds built at our new factory in Slovakia there were many cynics and doubters who claimed it would be a short-term measure.

"Well, it is still here and remains the most easily understood and extensive warranty in the new car business.
"It is transferable from owner to owner and only requires regular servicing according to our schedule and the use of genuine Kia parts.

"The seven year warranty is a statement of confidence in our quality and manufacturing back in 2004 and it remains that today.”

AM Poll
How has the COVID-19 pandemic affected your attitude or mental health? Please leave a comment
Vote
View all
975