Vauxhall Astra is Scottish Car of the Year 2015 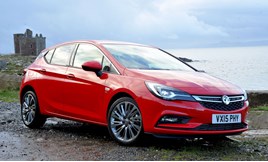 The Vauxhall Astra has been named as the Scottish Car of the Year, while Mazda also took home a hat-trick of prizes.

Leon Caruso, Vauxhall’s retail sales director, said: “We are very pleased Astra and Viva have been recognised by the Association of Scottish Motoring Writers.

“Winning the overall SCOTY gives us a huge boost and our retailers in the region will be delighted with the additional success I am sure this will bring to these cars.”

Alisdair Suttie, president of the Association of Scottish Motoring Writers, said the Astra was chosen due to setting new standards in the way it drives, efficiency and the quality of its consturction and materials.

He said: "Not only is it a pleasure to drive, it’s also a resounding endorsement of British workmanship.”

Land Rover enjoyed multiple awards at SCOTY 2015 as its new Ingenium engine helped the Discovery Sport win the Diesel title. In the Used Car of the Year battle, the Land Rover Defender came out on top thanks to “its incredibly strong residual values and enduring appeal as a workhorse and leisure vehicle”.

The Jaguar XE saloon was crowned best executive car of 2015.

Last year’s overall winner, Hyundai, was back up on the stage to receive the Design and Innovation Award for its ix35 Hydrogen fuel cell car.

The Volvo XC90 won the SUV category, the Skoda Superb Estate was best estate car and the Ford Galaxy won the MPV category.

At the other end of the scale, the Audi TT took the top spot in the Coupe category, while the Honda Civic Type R was named best Hot Hatch.