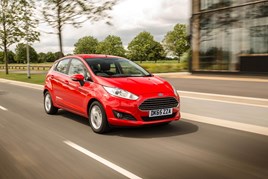 The record-breaking momentum of car registrations during 2015 has continued into the start of the year, with the SMMT confirming an 11-year high of 169,678 for January.

The month marks the highest number of new cars registered to private buyers in January in 12 years.

“Providing consumer confidence remains strong, we expect a more stable 12 months ahead, broadly similar to 2015 which was, of course, a record year.”

The biggest seller for January was the Ford Fiesta, with 8,353 registrations, which was followed by the Nissan Qashqai (4,839) and Vauxhall Corsa (4,803).

Alternative-fuel vehicles grew in popularity and market share during January.

Registrations were up by 32.1% on last year, to account for a record 3.6% of registrations.

Demand for diesel, which just retained the majority market share, remained stable, up 0.6%, while petrol registrations grew 3.7%, the SMMT said.

Sue Robinson, Director of the National Franchised Dealers Association, said: “Another strong month for new car sales in the UK, which off the back of three strong years augers well for the UK economy as all those new cars need servicing, which sustains 500,000 jobs, rather more than the 200,000 in automotive manufacturing.  On behalf of our members we welcome these figures.”

Commenting on the results James Hind, founder of online car search specialist Carwow, added: “New cars in general are now a more attractive option for buyers than nearly-new used vehicles, due to the availability of better finance deals and the packages that often come with a new car. The used car market is swiftly becoming a less tempting option for people.”

Steve Jackson, chief car editor at Glass’s, said: "New car registrations hit an 11 year high for January 2016, as earlier forecast by Glass’s. Consumer demand has broadly driven the increase with a number of new models available. This, combined with low interest rates and creative finance campaigns with PCP, have helped drive this record number. Fleet however has slipped slightly by 1.1% on the same period last year.

"Overall, there is no doubt that manufacturers have hit 2016 running and intend to make it yet another success on the registration front." 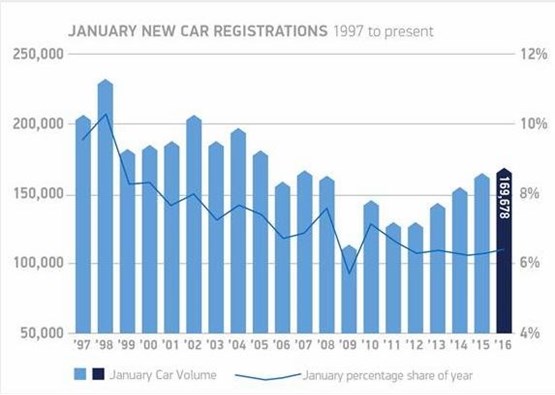