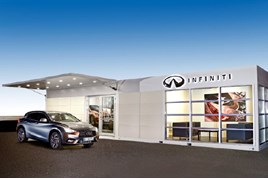 Infiniti has ambitious plans to double its sales volume this year, and new country director, Barry Beeston, believes fleet sales will be key to that growth.

Having seen fleet business increase by more than 30% while corporate sales director at Nissan, Beeston has joined Infiniti at a time he feels the brand is on the brink of a step change.

According to the Society of Motors Manufacturers and Traders (SMMT), Infiniti is the UK’s fasting growing car manufacturer.

It has sold 996 cars year-to-date, while recording a 40% increase last month compared with May last year.

So far, 46% of sales are from fleet, but the figure can be heavily influenced by one large deal as volumes are still relatively low.

Beeston told Fleet News: “I really believe there’s a great opportunity within the fleet market, with our new products Q30 and QX30 coming later this year.

“Their credentials are very strong, as are predicted residual values. Wholelife costs and CO2 levels are very positive as well.”

The British-built Q30 is a key fleet model for the Japanese manufacturer, according to Beeston.

Before the company can maximise on fleet sales, however, he wants to build infrastructure and back-office support, to give fleets confidence in the brand.

“You have to have a relationship with the customer through the whole lifetime of the vehicle,” said Beeston.

By utilising the significant resource at Nissan, he aims for the two businesses to work closer together behind the scenes in a similar arrangement to the Volkswagen Group.

Externally, the brands will be separate, while back-office operations are shared. This will allow Infiniti to leverage significant efficiency savings.

But Infiniti’s dedicated fleet team will remain separate, with plans to grow from a staff of three to 10, headed up by a national fleet manager.

Beeston believes ensuring that clients deal with dedicated professionals that are fully compliant with the products and brand is key.

“For me it’s about building a solid platform of growth for the future,” he said.

“In terms of our brand, we want to be perceived as a premium manufacturer with premium products.

“We need to maintain the balance between brand perceptions and interacting with the fleet industry and having the scale to do so.

“We are expanding our main dealer network and embarking on an authorised repairer strategy, so a combination of these will give us greater coverage, from an after-sales perspective.”

The company currently has 11 dealers and 10 authorised repairers that cover key regions such as Birmingham, Reading and London.

The current goal is to reach 26 dealers and 18 authorised repairers within five years.

Beeston said: “We have a number of dealers in different stages of development. There are numerous opportunities in the pipeline.”

Commenting on his career change, he added: “I saw it as great opportunity. I think Infiniti is about to take a step change in the UK, driven by the product, and it gives me the chance to run all elements of an operation in the country,

“I’m looking forward to that challenge and I think the brand is in the right place to make that step change.”

AM Poll
Should the product genius role move to purely online in the future? Please leave a comment
Vote
View all
116