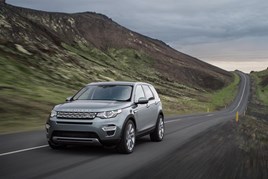 The SUV specialist placed joint third overall with M&S Food and Waitrose in the index, which tracks the quality of customer service in the UK. The results are based on a six-monthly online survey of 10,000 consumers dealing with more than 200 different companies across 13 sectors.

Land Rover’s position in the list, with a rating of 84.6, puts it ahead of Apple, Virgin Atlantic and John Lewis for customer service.

Kia placed second out of the car manufacturers in the top 30 in 17th place, followed by Mini (20), Suzuki (27), and then Hyundai and Mercedes-Benz in joint 29th place.

Suzuki was the highlighted as the ‘most improved organisation’ in the UKCSI for 2016. The Japanese brand added 9.1 points for a total rating of 82.4. The year-on-year increase in the number of points was greater than any other of the 226 companies classified, and the biggest improvement out of all of the 24 car manufacturers that took part in the study.

During the same period, the automotive sector equally saw a 0.6 point-rise in customer satisfaction.

Suzuki put the jump in the listing down to the launch of its nationwide Suzuki Service Promise initiative last summer.

It is designed to ensure that vehicle owners receive a consistently high standard of care across its entire network of service dealers when they take the car for routine servicing or repair.

The UKCSI said the highest performing organisations tend to perform better across the range of over 30 customer experience metrics tracked in the index. But their performance is particularly strong in complaint handling and over the phone experiences. These organisations have also been able to earn a significantly higher proportion of 9 or 10 out of 10 customer ratings.

AM Poll
Has technology taken jobs out of your dealership? Please leave a comment
Vote
View all
215