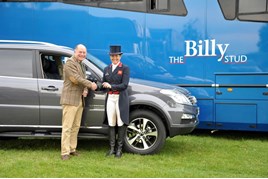 One of the UK’s top horsewomen and a member of the 2016 Olympic Team GB, Pippa Funnell MBE has become the first brand ambassador for 4x4 car manufacturer SsangYong.

Funnell will represent the brand at all the major equestrian events she attends during 2017, and will drive a four-wheel-drive SsangYong Rexton which with its 3-tonne towing capacity can easily tow a large horse trailer complete with two eventers.

Paul Williams, CEO of SsangYong Motor UK, said: “As a manufacturer of authentic four-wheel drive vehicles noted for their off-road and towing capabilities, the equestrian market is an audience we value enormously, and we are privileged to have a horsewoman of Pippa’s standing representing the brand.

"We very much look forward to working with her, and watching her compete at events such as the South of England International Horse Trials, which we also sponsor.”

Pippa Funnell added: “I am delighted to become an ambassador for SsangYong which is a real thoroughbred in its field.  Competing in the world of eventing requires early starts and long days, and I greatly appreciate the support from Paul Williams and his team.

"Having been driving a Rexton for a couple of months now I have been nothing but impressed with the way it drives.  I took it to France for Le Lion D'Angers World Championships for 6 and 7 year olds.  It was a thrilling end to the season with Billy Walk On having won the SsangYong South of England Horse Trials in September, and he went on to win individual silver at this prestigious event."