“Looking back, 2015 will be remembered as a year of a phenomenal amount of activity as a result of the supply push of new vehicles alongside a decline in profitability from the record levels achieved in 2015,” said Mike Jones, ASE chairman.

“This is partly a reflection of a change in the bonus arrangements for some franchises and partly reflecting some franchises recognising annual bonuses through the year to bolster profitability.

“The decline in December pushed us back below the psychologically important £200,000 per site barrier.”

The principal reason behind the drop in profitability was the increase in the vehicle sales expenses as a percentage of gross profit ratio.

“We have seen a decline in gross profits as a result of planned aggressive selling to hit target, lower used vehicle gross profits from nearly new vehicles and lower bonuses coincide with a rise in expenses to service the increased volume.

“We have also seen a continuation in the fall in overhead absorption – a trend which I cannot see reversing given current brand pressures on facilities.”

Overall new vehicle sales levels matched those from 2014, with the increased level of registrations coming from self-registered cars.

These vehicles helped push up used vehicle sales, which rose 6.7%.

“Early indicactions are that we are going to continue the same theme in 2016.

“Registrations are up again, despite the volume of pre-registered vehicles dealers came into 2016 with.” 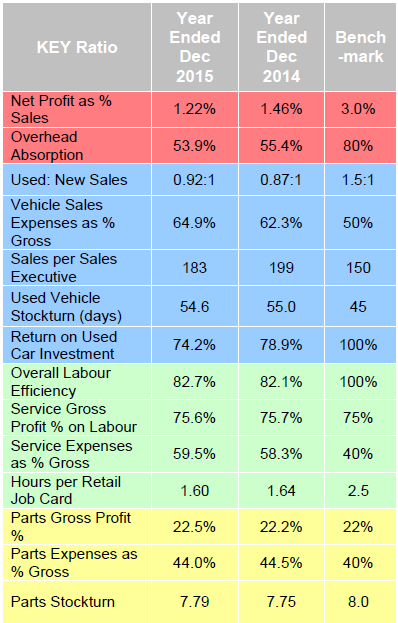