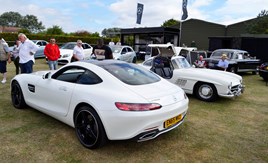 Star cars from Mercedes-Benz’s past and present turned out in force to support Mersea Island Lions Club Transport Classics and Summer Show.

And event sponsors Mercedes-Benz of Colchester teamed up with the local branch of the Mercedes-Benz owners’ club to showcase some of the latest cars that wear the famous three-pointed star as well as a stunning selection of models from yesteryear.

Amongst the current fleet on show at the event, which took place at the Waldegraves Holiday Park, was the stunning AMG-GT sports car.

Lloyd Watson, Mercedes-Benz of Colchester’s general manager, said: “It was great to join forces with our local Mercedes-Benz owners’ club for such a significant presence at the show as well as supporting an event that is important to the local community and raises money for many charities within it.”

David Page, regional officer of the Mercedes-Benz Club’s Anglia South Region, added: “It was a superb day and having the classic and new Mercedes-Benz models side-by-side drew some really positive comments.

“One owner even said that he thought it was the best stand he had seen at any classic car show, which was fantastic to hear.”

Organised by the local Lions Club, well over £6,000 was raised for good causes in the Mersea Island area by the Summer Show, which took place on August 15th.