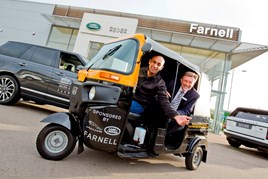 Farnell Jaguar Land Rover Bradford tuk tuk no chances with marketing when it teamed up with the National Asian Wedding Show to offer two lucky couples to win his and her Range Rovers for their wedding day.

Attendees at the show, which takes place on November 6, will have the chance to enter a competition to win a pair of luxury Range Rovers to ferry them to and from their wedding venue.

And the King’s Road dealership has been given an imported tuk tuk - the Asian equivalent of a rickshaw - which will be touring Bradford in the lead up to the show, giving out free tickets and merchandise, along with the chance to take a selfie behind the wheel.

Garry Clayton, head of business at Farnell Jaguar Land Rover Bradford, said: “We’ve had lots of people stop by the dealership to ask about the tuk tuk, or to get a selfie with it. We’ve even been made some offers by people wanting to drive it away, so it’s been causing a real buzz in the showroom.”

All couples have to do to enter Farnell's prize draw is share, in less than 500 words, the reasons why they deserve the prize.

Clayton said: “I’m really excited to judge the entries into the wedding car competition. I’m expecting there to be some fantastic stories and that making a final decision will be really difficult.”

Farnell Jaguar Land Rover Bradford is the headline sponsor of the National Asian Wedding Show, which is to be held at the Cedar Court Hotel Bradford.