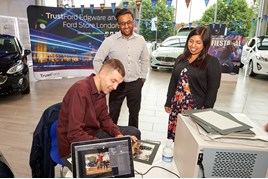 Trustford hosted VIP guests at its very own Fiesta-val with a visit from Pimp my Ride presenter and professional DJ Tim Westwood to marked the launch of Ford’s new hatchback.

The Ford-owned retail group’s flagship facility TrustFord Edgware welcomed Westwood on a night which invited customers to get to grips with the new Fiesta with a test drive experience.

The all-new Fiesta, which encompasses a new Bang & Olufsen sound system as standard on some models and is expected to be a popular £300 upgrade for most customers in entry-level models.

John Leeman, operations director at TrustFord, said: “TrustFord’s Fiesta-val was a fantastic opportunity for us to introduce the all-new Ford Fiesta to our customers.

“Our focus has been to promote the car’s key new features including an 8 inch touchscreen and a B&O sound system which is available in selected new models.

“We felt an event that resonates with music in the summer was best suited for this and added a touch of fun to the occasion.”

A Ford spokesman told AM that the manufacturer told AM that it expects 10% of annual Fiesta sales – currently around 130,000 cars – to be accounted for by the Fiesta Vignale, which starts at £19,345.