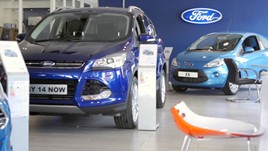 Lookers has expanded its representation of the Ford brand with the acquisition of Essex-based franchised car retailer Pollendine Motors.

Six of Lookers’ Ford dealerships are located in the South of the UK and the group said that its new Clacton dealership, which employs 15 staff, would complement its existing Ford site in Colchester, with the group also operating Ford franchised dealerships in Braintree, South Woodham Ferrers, Chelmsford and Sudbury in the South.

Lookers Chief Executive, Andy Bruce, said: “The acquisition of Pollendine Motors and the Ford dealership in Clacton is a perfect fit in terms of brand, location and culture.

“It is a dealership that we have long admired and one that we believe that we can develop further to become a key part of our operations in the South.”

The new Lookers Ford dealership in Clacton will operate as normal following the purchase, retaining all 15 staff previously employed by Pollendine Motors.

Customers are being contacted about the change and their details will be passed over to Lookers.

Commenting on the addition of another Ford franchise, Bruce added: “While we may have a very diverse portfolio of brands here at Lookers, Ford has always been a consistent and greatly valued part of our business.

“We believe that the relationship we have with the brand will strengthen even further as a result of this acquisition and we look forward to offering an even greater range of vehicles to our customers in Essex and the South.”

Lookers now operates a network of 154 franchised dealerships across the UK and has a group annual turnover of £4.7bn.

Lookers’ interim financial results will be announced to the city on Wednesday, August 15.