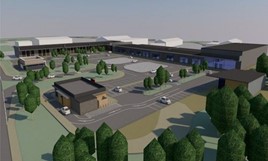 Day’s Motor Group has revealed plans for a 20-unit ‘retail trade park’ featuring drive-thru takeaways and food outlets and a car retail operation on the outskirts of Swansea.

The AM100 retail group acquired the eight acre St David's Industrial Estate, in Llansamlet, from Swansea City Council, for £2 million, two years ago.

Now plans for the site have been created by Powell Dobson Architects for Asbri Planning, on behalf of Days Property Holdings Ltd, and the developer claims that the venture could create 75 jobs for the local area.

The site will feature 212 car parking spaces and a “vehicle marketing suite”, the plans state.

According to a report by WalesOnline, the company wants to rename the site to 'Swansea East Trade Park'.

A planning, design and access statement, produced by Asbri Planning on behalf of Days Property Holdings Ltd, said: "They are committed to a significant capital investment in order to provide a modern development of largely Class B uses to serve Swansea and West Wales."

The brownfield site, off Clase Road, is around three miles north of Swansea city centre. The design and access statement added: "The design of the Trade Park has focussed on creating a development which clearly responds to local character as well as seeking to create an individual destination.

"Inclusive design will be an important part of the new development; the development is well connected to the surrounding area for public transport and pedestrians – with established links to Swansea City Centre.

“The proposals represent a sustainable development which responds well to its setting, presenting an unobtrusive addition to the commercial landscape."

WalesOnline reported that planners at Swansea City Council had previously indicated, in pre-planning discussions, that they would support drive-thru units on the site.

The plans are currently at the pre-application consultation stage, and will be submitted to Swansea Council as part of a formal planning application after April 29, 2019.

CEM Day: ‘We thrive in periods of change’

CEM Day: ‘We thrive in periods of change’