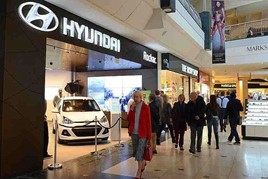 Ancaster Group will take on the franchise for Hyundai Motor UK’s former Rockar-operated store at Bluewater Shopping just over a month after Motorline announced its departure from the site citing viability concerns.

AM sources revealed that the South East London-based AM100 retail group will add the high footfall location to its Hyundai portfolio in the same year that it opened new showrooms with the Korean brand in Croydon (October 2018) and Welling (August 2019).

Currently ranked 99th in the latest AM100, with £131 million annual revenues, Ancaster Group also has Fiat, Abarth, Alfa Romeo, Jeep and Nissan franchises across 14 locations in the South of England and employs more than 310 staff.

Ancaster Group managing director, Stephen Wood, said: “We have a long-term business plan that features Hyundai as a key contributor to our ongoing growth.

“Our strategy for the future relies on greater brand and product awareness with new customers across a greater portion of the South East, so the Bluewater site fits perfectly with our plans.”

News of Ancaster’s move into Bluewater comes just over seven weeks after Motorline announced that it had ended its involvement in the store concept after operating the site for 16 months, having initially assumed responsibility for the operation of both Hyundai Motor UK’s retail stores, in Bluewater and Westfield shopping centres, in March 2018.

In a statement issued alongside Motorline’s annual financial results, the AM100 group stated that it did “not believe the mid- to long-term viability” of the shopping centre new car sales concept.

Motorline chairman, Glen Obee, said: “The current economic climate and pressure to maintain an acceptable level of income from our wider Group activities has resulted in our decision to make a limited number of amendments to our Group representation model.

In March this year Endeavour Automotive took on the Hyundai store franchise at Westfield Stratford City in a move motivated by a streamlining of market areas, according to the Korean brand’s managing director Ashley Andrew.

Following the move, Andrew told AM: “Initially Motorline expressed an interest in the concept but I think it was just natural to get the regional groups set-up as partner operations in their own territories.

“It just makes them far more agile because they have more demonstrators at their sites if they need a particular vehicle and they have service operations in the proximity.”

Speaking to AM shortly after he revealed Endeavour’s plans to take on the Westfield Stratford City store earlier this year, Endeavour Automotive managing director, Adrian Wallington, described the innovative mall-based retail offering as “a hard concept to ignore”, adding: “They had 10,000 people through the door in January alone.”

Whitehorn, who pioneered the store concept in partnership with omnichannel car retail specialist Rockar also underlined their role in exposing the brand to a new customer set by stating that the average age of a customer at the stores is 39, compared with 52 for the wider car retail environment, with women making up 54%, compared to 26% in a traditional dealership.