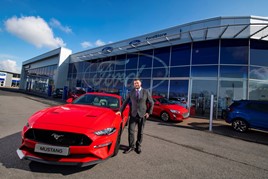 Lookers has completed its development of Teeside’s first-ever FordStore in a £3m renovation and extension project at the former Jennings Group site.

The AM100’s second-placed retail group has created a larger indoor new car display – expanded from five to 11 vehicles – with the help of a 3,500sq-ft extension which brings the total size of the Cargo Fleet Lane showroom up to 9,000sq-ft.

A 16,000sq-ft forecourt adjacent to the upgraded facility will provide enough display space for 250 used cars and vans, meanwhile.

Swindles initially joined Lookers having spent 14 years at Vauxhall Middlesbrough, where he progressed through to general manager.

He said: “We are looking forward to seeing some familiar faces at our brand-new Ford Store dealership, as well as attracting new customers from the surrounding area and beyond.

“The stage is now set for us to welcome a host of brand-new Ford models through our doors, which I’m sure our customers will already be looking forward to.

“Lookers is a brand that I have always admired, and I am excited to be joining at a time of continued investment into its nationwide network of sites.”

Lookers’ completion of the new Teeside FordStore facility comes 16 months after its former operator, Jennings Group, announced that it was commencing a £1m upgrade of the site.

This was followed this by plans for the September 27 closure of the group’s former Stockton Ford franchise, as reported by Teeside Live.

Last week Lookers announced its completion of the development of its new 63,600sq-ft car dealership in Farnborough, describing the new facility as “a true destination for everything Audi”.

The new facility in Hampshire has come as part of a significant recent investment in the German premium brand, and follows the £3m refurbishment at Guildford Audi and a similar makeover at Basingstoke Audi last year.

Lookers has invested heavily in flagship retail spaces during 2019, with February bringing the opening of a new flagship three-storey, £10m Volkswagen showroom in Battersea followed by the reveal of its plans to bring the Jaguar and Land Rover brands together under one roof with the creation of a new 16,193sq-ft Jaguar Land Rover (JLR) Dual Arch Concept dealership facility at Aston Clinton, Buckinghamshire.