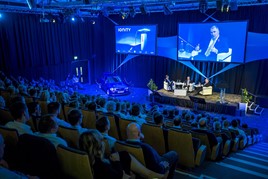 TrustFord chairman and chief executive Stuart Foulds vowed to continue investing in the group’s facilities when he welcomed 600 employees to its 2019 annual conference.

Staff from across the Ford of Britain-owned AM100 joined Foulds and his leadership team for the annual gathering which took place at the National Conference Centre, in Nottingham, on November 6 and 7.

Guests at the event, which was hosted by automotive journalist and PR Curtis Hutchinson, included Nick King from Autotrader and Zara Ross, the chief executive of TrustFord’s charity partner, Ben.

Last month 37 teams of TrustFord employees and supplier partners succeeded in raising over £117,000 for the Ben charity by travelling a combined distance of more than 20,000 miles in just 25 hours during the Breakout for Ben 2019 challenge.

It was the second running of the event which is now an annual fun-raiser for the group.

Foulds said: “It was particularly inspiring to hear from Zara about her work for our charity partner Ben.

“This year’s Breakout for Ben was a definite highlight and I’m so proud of my colleagues for raising so much money for the cause.

“Raising awareness of mental health is so important and I am delighted we have been able to support the vital work that Zara and her team do.”

Among the other landmark achievements of 2019 reflected upon during the TrustFord conference were a series of developments designed to enhance the business.

New Ford Stores and Transit centre openings have been completed at Cribbs Causeway, Staines, Newtonards and Lisburn, in Northern Ireland.

Expansion of the Parts Plus wholesale parts network has been rolled-out nationally to include new sites in Scotland, making TrustFord the largest operator in the UK.

QuickLane fast-fit aftersales locations were opened in the north of England and TrustFord has plans for at least 10 more scheduled for 2020, initially in Greater Manchester and Essex.

Growth of the TrustFord mobile servicing network has also been established for fleet customers across the UK with the addition of 25 new vans, a development which helped win the Fleet Dealer of the Year at the 2019 Fleet News Awards.

Driving an investment in the pursuit of new automotive sector talent, TrustFord also launched a ground-breaking partnership with the Princes’ Trust during 2019.

The project offers t 15 young people free training and the opportunity to become a technician at one of the new Quick Lane sites.

Foulds said: “It’s been a great year for the company and this conference is a fitting end to 2019.”