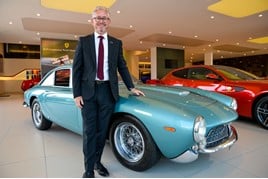 JCT600 has celebrated the busiest week of used car sales in its 74-year history after the easing of COVID-19 lockdown restrictions on England’s automotive retail sector.

The Bradford-based AM100 retail group reported getting off to a “flying start” after its showrooms were re-opened on June 1, with a 21% uplift across its 48 dealerships compared with the same week last year.

It was also a record-breaking week for incoming sales enquiries with volumes into the business increasing by 177% year-on-year as web traffic doubled compared with the levels experienced during lockdown.

JCT600 chief executive, John Tordoff, said: “After two and a half months of dealerships being closed, there’s obviously a huge pent-up demand from customers wanting to change their cars.

“While it’s been a frustrating period for us, our team and our customers, health and safety has, of course, to be the priority and we now have measures in place to make sure our showrooms are as safe as possible.”

What Car? predicted a V-shaped recovery for the car retail sector in a report published today, although concern was expressed that the promise of car scrappage scheme incentives could stall the early success of dealers’ return to showrooms.

It said that 29% of surveyed car buyers had suggested they were awaiting the possibility of an incentive, following reports that up to £6,000 could be made available through a Government-backed scheme.

The group’s businesses across Yorkshire and the North East, Derbyshire, Lincolnshire and Nottinghamshire, are operating visits by appointment in an effort to limit the number of people in its dealerships.

It has also clearly marked flows for customers to follow as well as rigorous cleaning for all high touch areas and hand sanitisation stations for colleagues and customers.

In addition, every vehicle is sanitised, sealed and then quarantined prior to a customer interaction, and all customer areas are sanitised after every use.

Tordoff said: “We have spent the last ten weeks preparing for the safe re-opening of our dealerships and we’re confident that we can deliver a flexible experience for all of our customers.

“We’ve also worked hard to keep our team informed throughout the period and ensure that returning colleagues are trained on all standards, processes and systems before they walk through the showroom door.

He added: “We expected to be busy, but the last ten days have been phenomenal.  On Monday 8th June, we recorded the highest number of sales enquiries into the business we’ve ever had – quite an achievement for a business as long-established as ours.”

In May last year JCT600 celebrated a record set of annual financial results for 2018 after the car retail group’s turnover rose 2% to a record £1.28 billion and profits held flat in what was described as a “challenging year”.

Used vehicle sales proved to be the Bradford-based AM100 group’s key performance driver, with sales up 9% in a market which delivered a 2.1% decline overall, according to a statement issued by the group.