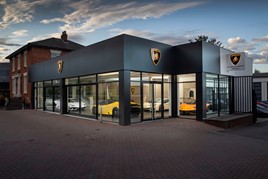 HR Owen has said that it is making “a limited number” of redundancies in response to the market challenges faced as a result of the COVID-19 crisis.

The luxury car retail group denied claims that it was poised to make cuts of up to 25% of its 500-strong workforce after consultation over redundancies opened last week.

That allegation was made by a source close to the business, who suggested the AM100 retail group was poised to make cuts among its managers and sales executives.

But the business said that many of the planned reduction in headcount would be made through early retirements and a reduced number of part-time workers.

In a statement issued to AM today (June 29) a HR Owen spokesperson said: "HR Owen has a long-term plan to strengthen its position as the UK’s leading luxury automotive dealer group, which involves both continued investment in the core business and on-going efficiency gains.

“The global pandemic has accelerated this plan and like most of the retail motor industry, H.R. Owen has regrettably had to make a small number of cuts to the business. This has included a limited number of reductions in part time workers, contractors and, in some cases, redundancies, across the Group."

HR Owen chief executive, Ken Choo, will be keen to main his business’ personal approach to luxury car retail in the face of any headcount cuts.

In an exclusive interview with AM magazine last year, Choo spoke candidly about the value of customer relations and a drive to turn car ownership into membership.

“Anybody who buys cars from us gets a sort of membership into that elite segment that we have,” he said.

“If you look at our customers versus other dealers, we are very personalised. We know them by name, we take them to the factories, to drives, to events, and they feel like part of the family. We get to know their family as well, and the cars they have in their collection, so it’s a very personalised relationship.”

A year ago HR Owen’s financial results for the year to April 30, 2019, revealed that the London-based supercar and luxury car retailer had delivered a four-fold increase in pre-tax profits in the three years since its acquisition by the Malaysian Berjaya Group.

The dealer group, acquired by billionaire and Cardiff City owner Vincent Tan back in 2013 and run by chief executive Ken Choo, published results which detailed profit before tax of £8.3m and annual turnover of £459.9m.