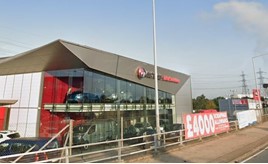 Bristol Street Motors’ Chingford Vauxhall dealership has been denied planning permission to resurface an area of green belt land for vehicle storage after making use of the land ‘illegally’ for nine years.

Waltham Forest Council’s planning committee turned down an application from the Vertu Motors-owned car retail operation this week after deciding that the harm the plans would cause to the land – part of the Lea Valley Regional Park – would outweigh the economic benefits.

The East London and West Essex Guardian reported that, if the dealership’s use of the land had gone unnoticed for another year current planning laws mean it would have been immune from any enforcement action.

Cllr Marie Pye (Lab, Leytonstone) said: “If every time someone wanted to use Metropolitan Green Belt land, we said ‘it’s going to create jobs, go ahead’, we would not have much grass left in the borough.”

BSM’s Vauxhall Motors dealership, off the North Circular in Shadbolt Avenue, Chingford, was granted planning permission for a stretch of land just outside the green belt in 2011.

The dealership subsequently applied for planning permission to pave an area of land to store 19 cars and build a 50sq-m shed for storage and servicing.

It claimed that making use of the green belt land would lead to the creation of 10 new jobs.

After planning committee members chose unanimously to reject the application at a virtual meeting held on August 4, Cllr Alan Siggers said the committee did not have “much choice really” other than vote against the scheme, given the council’s own planning policy.

The BSM Vauxhall Chingford dealership was developed in 2011 and included technology to ensure 20% of the energy used on site would be covered by on-site generated renewable energy.

As part of its plans for the green belt vehicle storage facility BSM had said that it would incorporate semi-permeable paving and also pay to remove invasive Japanese knotweed from the land, which could have its green belt status changed under a forthcoming Local Area Plan.