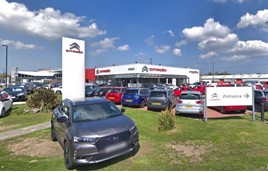 Wingrove Motor Company is set to add a Peugeot franchise into its Citroen car dealership at Silverlink Newcastle.

The Newcastle-based car retail group, which has dealership sites in Silverlink, Newcastle, Cramlington and Ashington, operates Citroën, Peugeot and DS franchises and is set to make a £750,000 investment in the location as part of the move.

Improved electric vehicle infrastructure will form part of the franchised site’s upgrades, which are being rolled out as the Wingrove business celebrates its 95th anniversary.

Managing director, Josh Parker, told Bdaily that although 2020 had “been challenging for everyone” the business remained “in good shape”.

He added: “We’re confident of continuing to grow in the years leading up to our 100th anniversary.

“Our industry has gone through incredible change during our lifetime, and most especially over the last few years.

“We began to offer electric vehicles very soon after they became available, have over a dozen different electric/plug in hybrid vehicles on display and are ready to capitalise on further growth in this area of the market.

“The Silverlink dealership refurbishment looks really impressive, and we’re excited by the potential that it and our recently-refurbished West Road site have to help us deliver on our growth plans.”