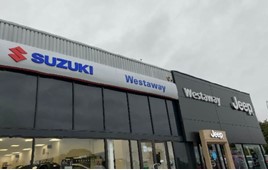 Westaway has successfully completed the opening of its new Suzuki dealership in Northampton with the handover of its first car sale from its new franchised site.

“Huge congratulations to the latest addition to the Suzuki network - Westaway Northampton - for completing their first new car handover, great job and welcome aboard,” he said.

The new Westaway Suzuki showroom shares a roof with the group’s Jeep franchise in a space previously occupied by Mitsubishi Motors in the UK.

Westaway declined comment on the move when contacted by AM this morning (October 23).

According to its group website, Westaway remains a Mitsubishi Motors in the UK franchisee. It also represents the Ford, Isuzu and SsangYong brands.

The addition of Suzuki follows the opening of new dealerships with the Japanese brand for Richmond Motor Group and Delgarth Motor Group, during the space of a week, last month.

Richmond began welcoming customers to its newly-created facility adjacent to the Skoda franchise at Broad Oak, Botley, which became part of the group with the acquisition of Sparshatts in August last year.

Delgarth, meanwhile, opened the doors to its new Suzuki franchised site in the Japanese brand’s UK hometown of Milton Keynes, occupying another site which had also previously housed a Mitsubishi franchise.

Mitsubishi retailers expressed their shock at Mitsubishi Motor Corporation’s “unexpected” decision to exit the UK and wider European markets following an announcement on the move back in July.

Mitsubishi Motors in the UK managing director Rob Lindley later told AM that he expected “no mass exodus” of car dealers from the brand’s franchised UK retail network.

Lindley insisted in his interview with AM that “as it stands nothing has intrinsically changed”.