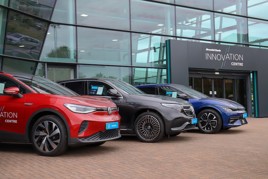 AM100 group Arnold Clark has opened its first Innovation Centre in England, which will help to educate motorists about electric cars and alternative fuel vehicles (AFVs) ahead of the UK Government's ban on new combustion engined cars from 2030.

It follows the success of the first Arnold Clark Innovation Centre in Glasgow, Scotland.

Since that site opened in August 2021 it has helped hundreds of people to understand the role of AFVs and to gain experience of the variety of powertrains on offer across numerous manufacturer brands.

Innovation Centres do not sell vehicles, however they have helped at least one in 10 visitors to go on to purchase an electric or hybrid vehicle.

Arnold Clark chief executive and group managing director Eddie Hawthorne said: 'Innovation is at the heart of everything we do – that’s why we’ve remained at the forefront of the automotive industry for over 60 years.

‘Currently, only around 4% of all new car sales are AFVs. Of course, that number would be higher already but for the recent supply issues in the industry.

'However, the number of EV drivers will continue to grow, and we want to make sure we're here to guide them on their journey."

The existing centre was one of the factors which impressed the judges of the 2022 AM Awards, who awarded Arnold Clark the Retailer of the Year Award.

For consumers thinking about making the switch to electric, a team of alternative fuel experts, known as ‘innovation geniuses’, will be on hand at the Stafford Innovation Centre to answer any questions, such as about vehicle range, charging processes, any financial benefits, and visitors can book test drives. It also has several different interactive kiosks and displays where customers can learn about the future of the automotive industry.

"We invested well over £5 million in the Innovation Centre in Glasgow, and I've been delighted with its success and how well it's been received," Hawthorne added.

"It’s not a site we are selling anything from. It’s specifically an innovation, information and educational centre and it will be the same in Stafford."

Car manufacturers 'not doing enough' to educate buyers on AFVs

Car manufacturers 'not doing enough' to educate buyers on AFVs

AM Poll
Have you noticed fuel economy rise in used car buyers' priorities this year? Please leave a comment
Vote
View all
3276