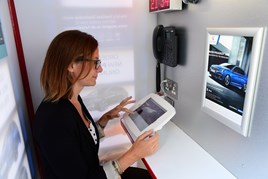 Peugeot geared-up the promotion of its online retailing platform with the creation of “the world’s smallest car dealership” but will it be enough to reach a 6% UK market share target by 2020?

The PSA-owned French brand made headlines with the opening of a wifi-equipped telephone box in London’s Russell Square which has been converted to become 0.8m-sq showcase of its Order Online ecommerce platform.

But it remains to be seen whether the push towards online sales will bolster UK sales sufficiently to meet the ambitious market share target revealed to AM by Peugeot UK managing director David Peel in a recent interview with AM (see the forthcoming October magazine’s supplier interview).

As the manufacturer recorded a 15.2% decline in registrations to the end of August (55,008), resulting in a market share of 3.5%, and the network prepares to contract from its current 211 sites the pressure might be on to deliver online sales.

Speaking to AM following the launch of the “Peugeot Russell Square” online retail site this week, PSA UK’s head of digital, Maria Rogers, would not reveal the retail figures achieved by Order Online since its January launch.

She said: “I’m not comfortable sharing sales figures. What I can say is that we have had orders from customers aged 19 to 73-years-old and the average online customer is a 39-year-old male using a desktop computer.

In reality the Peugeot Russell Square site is unlikely to unsettle the brand’s nearby retailers – Peugeot Edgware being the closest retail, according to Rogers – in terms of an encroachment on sales.

How a greater emphasis on the online offering may impact the mood of Peugeot’s franchisees, following a showing in the NFDA’s Summer 2017 Dealer Attitude Survey which saw the brand experience a 112.3 total loss of points since the Winter 2017 survey across all questions, is less certain.

Peugeot placed 19 out of 29 manufacturers with a score of 5 (average: 5.6) when its retailers were asked to rate it overall in the survey.

Rogers is confident that Peugeot’s retailers will realise leads from the online sales platform and is keen to emphasise its ability to draw new customers to the brand.

She said: “I think if we can position ourselves as leaders in online sales we can attract new customers to the brand and that will only benefit retailers, who handle the sales generated online.

“Here in the Peugeot Russell Square telephone box we have scale models for people to take a look at and there are measurements available online, but no matter how much that is the case customers need to actually get into a vehicle, in most cases, to truly understand how it will meet their needs.

“Order Online is definitely proving to be a lead generator for the network and that will only continue.”

In June PSA Retail opened a digital showroom in Paris and has plans to open a further 30 locations across Europe by 2020.

The store commits 150 square metres to each of PSA's three brand and uses Dassault Systèmes ‘virtual garage’ technology to create a "3D digital visualisation" of models for consumers.

Rogers said that she would like to see more innovative spaces to help promote the brand and online retail journey, like the Peugeot Russell Square site, which will remain open until the end of this month.

She said: “It would be lovely to do more of this.”