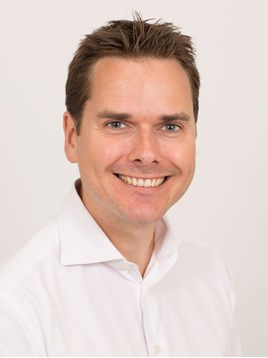 Car buying insight specialist Sophus3 has revealed that is costs an average £3,430 to generate a test drive via online marketing.

The automotive digital market and consumer intelligence provider analysed the results of 1.3 billion web-site visits from across Europe in a bid to deliver what it calls “the most comprehensive analysis ever of online consumer behaviour in the European car industry”.

Sophus3 drew information gleaned from web visits in France, Germany, Italy, Spain and the UK and found that the automotive sector had delivered a 17% year-on-year rise in website visits in 2017 – showing a growing reliance on digital marketing. 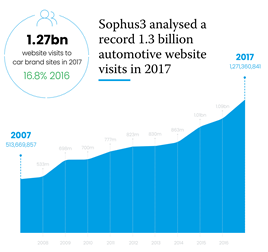 “All indications are that the European car industry has the potential for a much-needed market resurgence. However, challenges lie ahead in the short and medium term, especially in the UK and for brands reliant on diesel.

“Sophus3’s role is to help the car industry understand consumer behaviour behind the numbers and therefore improve engagement with their visitors online.”

Sophus3’s research found that, on average, it costs £3.43 in marketing to deliver each of the 1.3 billion web visits, yet just one in a thousand visitors request a test-drive, meaning each test-drive costs at least £3,430 on average to generate.

It found that 59% of all web traffic was via smartphones or tablets.

Consumers are also becoming more brand agnostic, according to Sophus3. The average number of car brands considered is six compared to four in 2015 and 2.5 in 2007.

SUVs attracted most attention online, meanwhile, with 35% of visitors to car websites looking at a vehicle from the sector, up from 24% in 2016.

Despite this dominance online, SUVs made up 30% of sales by segment indicating the SUV market still has significant room for growth.

Sophu3 also found that an increasing number of car manufacturers were making use of video to grab the attention of consumers online.

A total of 960 million car brand films were viewed on YouTube in 2017, yet just 1.7% of web traffic came via social media. Sophus3 said: “There is clearly lots of work to be done within digital marketing departments to convert this audience.”

Sophus3’s ‘Digital Car Buyers in Numbers’ report is presented annually at its automotive forum is now in its 16th year.

Held in London, this year’s forum focused on the company’s eDataXchange collaboration, a unique online analysis and data-sharing project that provides over 30 automotive brands, and leading automotive media publishers, with insights into market and digital marketing performance. 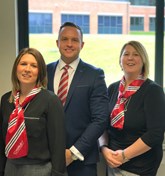