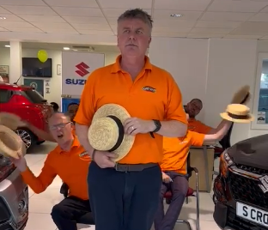 Chapelhouse Motor Group staff have proved that they are signing to the song sheet of Suzuki’s new #GoodDifferent marketing campaign with a showroom-stopping barber shop quartet performance.

The Japanese car brand launched its new TV advertising campaign and wider #GoodDifferent marketing push this month and the sales team at the Warrington dealership wasted no time in embracing the idea to leverage its profile on social media.

General manager Richard Lillywhite told AM that it took him around 30 minutes to pen a Suzuki-themed tuned based on the iconic Italian anthem That’s Amore.

It may have taken a little longer to get the team to play along, however.

“In the end they were happy with me to stand at the front and they were all game for it,” Lillywhite told AM.

“I think it’s a great outcome for 30 minutes filming.”

Suzuki GB Director of Automobile Dale Wyatt was one of the first people to praise the team for their efforts when the video was posted via LinkedIn and Facebook yesterday.

Chapelhouse became Suzuki’s largest Suzuki franchised partner with the recent addition of its new dealership site in Blackpool, which took it to eight locations.

It had previously grown through the acquisition of BCC’s Suzuki franchises in Bolton and Blackburn.

Lillywhite said that this week’s musical social media post is part of a wider push by the business to leverage video and have some fun with its customers while pursuing its main goal of driving trust and stronger relationships.

“I don’t want to be a social media luvvy, but I’m keen to do a lot more with video in the business,” said Lillywhite.

“It’s a great way of introducing ourselves to our customers and we get literally zero negative feedback.

“Right now we’re producing around 100 CitNOW and social media videos each month and there is more to come from us. Watch this space.”

She said: “It's been fantastic to showcase the fun side of the company and team. At Chapelhouse we're as individual as the Suzuki brand and are pleased to be a part of the Suzuki Good Different campaign.” 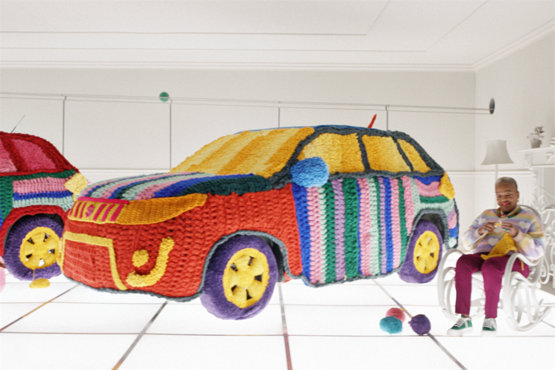 Playing into the fact that Suzuki is a bit of an unknown, the ad brings to life tongue in cheek folklore around the brand and what makes them good different; from a choir creating the sound of the car horn, to Grandmas knitting them cardigans to fit a Vitara SUV.

Director Olly Williams also moonlights as a production designer, meticulously creating 3D models of all the sets that were then constructed for real to be shot in camera.

Alex Key, Suzuki GB’s senior marketing communications manager, said: “At Suzuki, we’ve always been proud of our unconventional history; we love our new brand positioning as, for the first time, it’s enabled us to step up and own that feeling of being a little bit different, whilst pairing it with robust, research driven product claims designed to deliver disruptive reappraisal.

“We’re excited to take the brand in this new direction.”