The Finance and Leasing Association (FLA) has warned that inflation could peak at 8% in the first half of 2022 after the global economic outlook weakened following Russia’s invasion of Ukraine.

Car finance business volumes rose 43% year-on-year in January, according to the FLA’s latest data, but this came in comparison to a period impacted by dealership closures resulting from government’s COVID-19 mitigation measures.

And while some level of recovery remained on the cards, Geraldine Kilkelly, the FLA’s director of research and chief economist, suggested rising pressure on consumers’ disposable income is set to stymie the sector’s progress.

“The strong performance of the consumer car finance market in January in part reflects the closure of showrooms during the third UK lockdown last year and the continued record-high growth in used car prices,” said Kilkelly.

“Annual new business by value reported by the consumer car finance market was only 1% lower in January than its pre-pandemic level.”

She added: “The economic outlook in the UK and globally has weakened following the invasion of Ukraine, with consumer price inflation in the UK expected to peak at more than 8% in the first half of this year.

“Nevertheless, we continue to expect further growth in the market during 2022 as demand for finance for electric vehicles and used cars remains strong.” 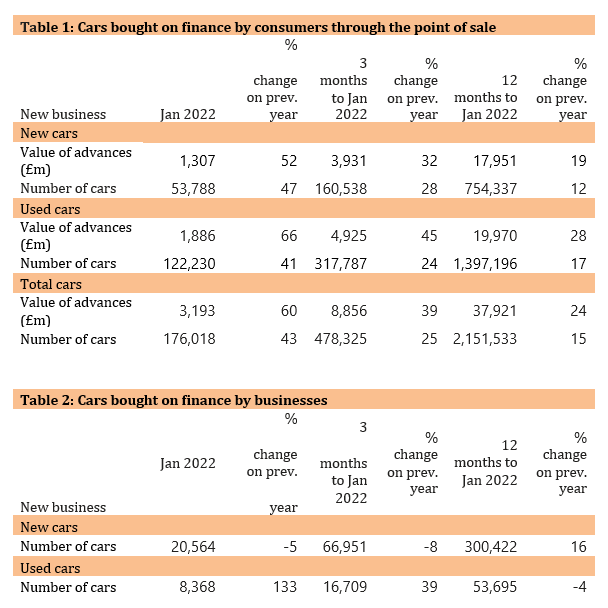 The FLA’s data for January showed that the consumer car finance market reported new business volumes up 43% to 176,018 units.

The corresponding value of new business increased by 60% over the same period, rising to £3.19 billion, it said.

In the twelve months to January 2022, new business volumes grew by 15% compared with the same period in 2021.

In the twelve months to January 2022, new business volumes in this market were 17% higher than in the same period in 2021, the FLA said.