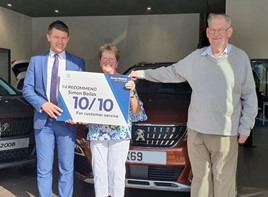 Simon Bailes Peugeot customer Elizabeth Hutchinson has been labelled as Peugeot UK’s most dedicated car owner having exclusively driven a series of the French brand's latest models since 1970.

Northallerton-based Simon Bailes Peugeot is celebrating the loyalty of the 67-year-old motorist 50 years after her father bought her first car, which she referred to as a “smart blue” Peugeot.

Although she wasn’t aware what model it was, it’s likely to have been a 204, which was popular in the year she received her first car.

The 67-year-old has since owned so many different Peugeots that she has lost count, however, with a variety of models ranging from a 207 to the latest 3008 SUV.

The Peugeot fanatic said: “I’ve always loved Peugeots ever since my father bought me my first one. They are just great cars.

“It’s hard for me to remember the exact number going back 50 years, but I do know I would never consider driving any other make.”

Hutchinson and her partner are currently driving a 69 'plate Peugeot 3008, which was their fifth purchase from Simon Bailes Peugeot, in Stockton.

The Yorkshire-based driver took her longest trip in a Peugeot when she drove to Scotland on holiday.

She told group chief executive, Simon Bailes, about her loyalty during her latest visit to the dealership, in which she purchased her latest car.

Bailes said: “I was completely taken aback as it’s rare for anyone to have only bought one make of car over such a long period.

“She has driven a variety of models over the years and it is a tribute to Peugeot that she has never once considered switching to another manufacturer.

“In fact, Elizabeth may well be the most devoted Peugeot driver in the UK.”

Hutchinson plans a series of local daytrips in her new car, however, she’s adamant she will never disown the car manufacturer.

She concluded: “Peugeot was my first car and it will definitely be my last.

“People might think it’s a little odd, but I know what I like and I’m more than happy to stick with them.”