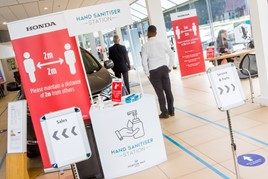 Car retailers in England and Wales celebrating the reopening of car showrooms after COVID-19 ‘Lockdown 3’ are now eager to leverage pent-up demand, with some expecting a “bumper Q2”.

As the countdown to reopening drew to a close this morning (April 12) retailers who had been working to prepare their staff and premises for a return to physical trading told AM that they were “unbelievably positive” about their prospects.

Perrys Motor Sales managing director, Darren Ardron, said that it “feels great” to be back in business at showrooms and hailed the incredible work of his team to get showrooms ready for the return of customers while CarShop chief executive Nigel Hurley said it felt like a “New Year’s Day”.

Devonshire Motors managing director, Nathan Tomlinson, meanwhile, said that he was expecting customers to swiftly switch to from online to physical retail once again now that the option is open.

“Throughout last week we saw an increase in digital enquiries that were requesting physical visits for test drive and product familiarisation,” said the dealership boss, who was keen to embrace the offer of a blend of online and offline retail once again.

“Equally, we saw customers declining digital conversion, preferring instead to make an appointment to physically complete on sales this week. I think that’s quite telling.

“Again, a demographic that probably would have bought via a fully online, but with human contact, process if they had to will still prefer the traditional route if they’re given the option.”

Retailers have been working hard to get sales staff back up to speed for April 12 and, while many expect any pent-up in demand to be behind that seen last June, Hurley is keen to get back up to speed quickly to leverage what he believes will be a “bumper Q2” for Sytner Group’s used car supermarket division.

Hurley said: “All the planning throughout lockdown to ensure we have a positive reopening has been outstanding. We’ve learned so much about different ways to help our customers buy cars. Probably the most significant being Click and Collect and the slickness of our digital communications with our customers to achieve this.

“We are keen to ensure those learnings aren’t lost so have “locked in our lockdown learnings”.

“I expect footfall to be very high this week particularly over the weekend where we are preparing to expect the kind of volumes we had in June post lockdown 1.0.

“Without doubt Q2 is going to be a bumper period for us.”

While much of the social media noise of April 12 has been focussed on a return to the pub, car retailers across the UK have been pushing hard to remind customers that the day is a big day for car buyers too. 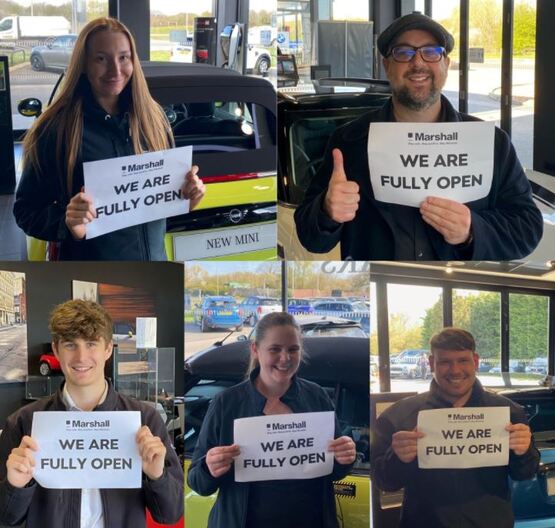 Marshall Motors chief executive, Daksh Gupta, followed up a pictorial countdown on Twitter over the past month with an interview on Sky News this morning as his retailers gained huge traction on the social media platform with a “We are fully open” campaign at branches across the UK.

As showrooms opened their doors to customers in England and Wales today, car retailers operating in Northern Ireland who were able to resume outdoor trading from today – launching their own reopening campaigns to alert buyers.

Although the easing of lockdown will hopefully bring a boost to retail and manufacturing, manuy reatilers have been keen to highjlight their newfound flexibility and digital processes developed over the past 12 months.

Perrys Motor Sales, Devonshire Motors and CarShop all said that they had been able to maintain near-normal levels of aftersales business in Q1 and the Society of Motor Manufacturers and Traders (SMMT) car registrations data for March showed year-on-year growth of 11.5%.

Last month Arnold Clark chief executive, Eddie Hawthorne, told AM that he approved of the Scottish Government’s cautious return to trading – with reopening scheduled for April 26 – if it meant that ‘Lockdown 3’ would be the nation’s last.

Tomlinson was cautious about celebrating an end to lockdowns just yet. He said: “We’ve worked hard to have a very switchable format and structure, so that we can react quickly whether physically open in the showroom or not.

“I guess you can say that this is the ‘new-normal’ now, not knowing how long any phase will last, at least not yet.”

COVID positive: how car retailers improved their operations in ‘Lockdown 3’

COVID positive: how car retailers improved their operations in ‘Lockdown 3’