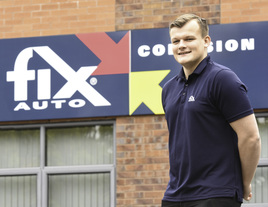 Fix Auto UK has appointed Rob Pugh as head of commercial for its eight owned sites with immediate effect.

Pugh will report directly to the company’s shareholders and is responsible for overseeing the current network of bodyshop sites, as well as any additional centres that are added to the network in the future.

Pugh, aged 25, is a recipient of the Bodyshop Magazine 30 Under 30 Award in 2020 presented in recognition for his work in supporting Fix Auto UK Franchise Partners particularly during the pandemic.

He was seconded into the Fix Auto UK management team tasked with running the owned sites division in March this year, primarily to assist Nigel Luffman as he battled ill health.

Nigel lost his battle with cancer and sadly passed away over the August Bank Holiday weekend.

Grace Weddell has stepped up to be the network’s communications manager, overseeing the area of the business previously managed by Pugh.

Pugh said: “I’m delighted to be given an incredible opportunity. There is a huge amount of potential surrounding our existing centres and, with life getting back to some kind of normality, we are in a prime position to unlock that potential and continue our development programme initially instigated by Nigel.”

Ian Pugh, managing director of Fix Auto UK, said: “Rob has surpassed all expectations and really has stepped up to the mark and delivered on every task we’ve asked of him.

"He has brought a refreshing and exciting new outlook to business management and this appointment is a reflection of that.”