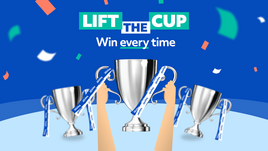 Heycar will reward car dealers with vouchers for Domino's Pizza, BT Sport and electrical goods as part of its new Lift the Cup sales incentive scheme.

As dealerships gear-up for a busy period of car sales when England's showrooms reopen on April 12, the scheme will reward dealers with a prize every time they sell a car that Heycar provides the lead for.

Heycar said the rewards vary from Domino’s Pizza and weekends away to BT Sports passes and entertainment packages - which includes an 80-inch TV.

Sport has become a go-to advertising opportunity for car retailers during the COVID-19 pandemic, with many recognising its place as one of few ongoing mass appeal events still ongoing.

Each salesperson can claim up to five rewards per month by recording their sale on Heycar’s Lift the Cup microsite.

Karen Hilton, chief commercial officer at Heycar, said: “There’s no doubt that the last year has been a challenge, so what better time to reward our dealers than now?

“That’s why we’ve launched our Heycar extra reward scheme - starting with the Lift the Cup campaign - to give something ‘extra’ back to people who have worked tirelessly over the last year and are now preparing for a very busy period when dealerships reopen from next month.

“As dealerships prepare to open on Monday April 12, we’re expecting showrooms to see strong footfall with sales activity anticipated to be high.

“March is traditionally a peak month for sales of new cars, as customers wait for number plates to come in, so we believe sales in April this year will be at a similar level to the March of previous years.

“This is coupled with the increase in savings people have made while the nation has remained under lockdown, which we fully expect to result in high levels of spending on vehicles from April onwards.”

Heycar reported its offer of free vehicle deliveries in November 2020, has seen deliveries approaching 90,000 miles - more than treble the earth’s circumference of 24,901 miles.