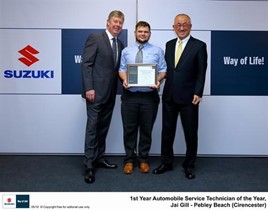 Suzuki GB has named this year’s winners of its annual Aftersales Guild Awards, which took place at the De Vere Horwood Estate in Buckinghamshire.

Forming part of the vehicle manufacturer’s distance learning programme, the ceremony marked the final stage of Suzuki’s Aftersales Guild Competition, which saw individuals from across the brand’s 159-strong dealer network vie for the top spot in the Aftersales Manager, Aftersales Advisor and Technician of the Year categories.

The final main award of the night, the Technician of the Year accolade, went to Carl Thomas of Ludlow Motors.

In recognition of their achievements, the three category winners received a £200 shopping voucher, and joined the rest of the finalists for an off-road and sailing trip in Palma, Majorca.

The finalists were put to the test in a series of demanding challenges on the day of the gala dinner.

Suzuki GB’s director of aftersales Denis Houston said: “We would like to congratulate everyone who took part in the competition, and they should be commended for their hard work and dedication that they have shown throughout the contest.

“We are always very impressed by the exceptional talent exhibited during the tasks, which makes for an exciting and closely fought competition.”

The gala dinner also saw the presentation of the annual Apprentice of the Year Awards and Sam Harrison from Blackshaws Garage collected the Tim Crewdson Award which recognises the apprentice that has shown the greatest improvement during the past year.

The winners of the Apprentice of the Year Awards are as follows:

Houston said: “The Apprentices deserve a special mention as they are all rising stars within their respective field and we look forward to following their exciting journey ahead as their careers evolve.”