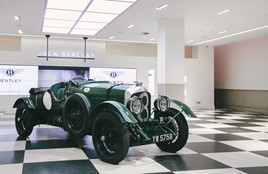 Jack Barclay Bentley will be hosting a free exhibition of James Bond rarities, including original Bond cars and Ian Fleming first edition novels, for a week this month.

The free 007-themed exhibition has been organised in partnership with Peter Harrington Rare Books and will allow visitors to the HR Owen-owned showroom to see key moments from the genesis of the James Bond story.

A first edition, first impression Casino Royale book – the first ever appearance of James Bond – signed by Ian Fleming himself, and valued at £135,000, will be among the items on display.

Peter Harrington Rare Books’ owner, Pom Harrington, said: "Bond has been at the forefront of book collecting concerns for decades now, and a large part of that fascination stems from quite how intriguing a man Fleming was in his own right."

From some of Fleming’s earliest work on Bond to arguably his last, Peter Harrington Rare Books will be supplying a corrected typescript of ‘The Man with the Golden Gun’, used as the setting copy for Fleming's last Bond novel.

This typescript contains Fleming's last ever work on James Bond, and is valued at £175,000.

Harrington said: "Bentley is a prime example of the latter, and we're delighted to be collaborating with Jack Barclay Bentley for this exhibition."

Jack Barclay Bentley serves up a taste of Wimbledon

Jack Barclay Bentley serves up a taste of Wimbledon