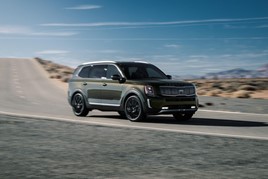 The Kia Telluride fended off competition from the Porsche Taycan and Kia Soul EVs and the latest Mazda models to be named World Car of the Year - despite only being available in America.

The petrol-powered large SUV was victorious over the Mazda CX-30 and Mazda 3, which were both runners-up and the German performance car, which claimed the World Luxury Car and World Performance Car of the Year titles.

The Telluride was chosen from an initial World Car of the Year entry list of 29 vehicles from all over the world. Vehicles were selected and voted on by an international jury panel comprising 86 prominent automotive journalists from 24 countries.

Kia has no plans to bring the seven-seat SUV, which has a larger footprint than a Volvo XC90, to Europe.

Alongside the headline award, four other titles were announced.

“Everyone at Kia is truly honored to receive not just one, but two awards from the World Car Awards judging panel,” said Thomas Schemera, executive vice president and head of product division at Kia Motors Corporation. “This is one of the hardest-fought competitions in the global automotive industry, proving that the Telluride and Soul EV are both truly outstanding vehicles.

"These accolades are testament to the talents and efforts of a worldwide team, who all strive to create desirable, high-quality and practical cars that drivers love.”

It fought off competition from the Mercedes EQC and its 911 stablemate in the Luxury class, while the Performance category was a hat-trick for the brand with the 911 and 718 placing as runners up alongside the Taycan.

“The Porsche Taycan was designed with a clear purpose: To show that an electric car could provide the performance, driving pleasure and everyday comfort and usability that characterizes every Porsche. We are very proud that the international jury of the World Car Awards believes that we have succeeded”, said Oliver Blume, chairman of the Executive Board at Porsche AG.

Having missed out on the headline award, the Mazda 3 was crowned World Car Design of the Year.

Mazda UK managing director Jeremy Thomson said: “it’s fantastic that the Mazda3 has won such an acclaimed global design award and it’s testament to the work of Mazda’s designers that the Mazda3 can win acclaim for its styling against super tough opposition from across every sector in the industry.

"In the Mazda3 we simply have one of the best-looking family cars in the world, and this award cements that achievement.”