COVID-19's financial toll on the UK car manufacturing sector could top £12.5 billion loss due to production lost during the pandemic's enforced lockdown period.

Carmakers produced just 197 during April, according to the Society of Motor Manufacturers and Traders (SMMT), after manufacturing plants were temporarily “mothballed” in March to protect the safety of their workforce.

Vehicle production slumped by 99.7% last month in an unsurprising result for the sector which SMMT chief executive Mike Hawes said served to “highlight the tremendous challenge the industry faces”. 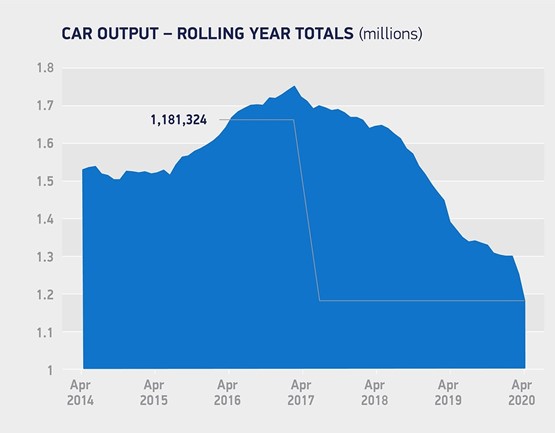 Following March’s car production decline of 37.6% the SMMT said that COVID-19 could deliver an £8.2 billion hit to UK car manufacturing in 2020, which could get “much worse” without a rapid retail resurgence.

Today (May 29) a revised independent outlook forecasted that less than a million units may be produced in 2020 with lost production costing sector up to £12.5bn.

Hawes said: “With the UK’s car plants mothballed in April, these figures aren’t surprising, but they do highlight the tremendous challenge the industry faces, with revenues effectively slashed to zero last month.

“Manufacturers are starting to emerge from prolonged shutdown into a very uncertain world and ramping up production will be a gradual process, so we need government to work with us to accelerate this fundamentally strong sector’s recovery, stimulate investment and safeguard jobs.

“Support to get all businesses through this short-term turmoil will ensure the UK’s many globally-renowned brands can continue to make the products that remain so desirable to consumers the world over and, in turn, help deliver long-term prosperity for Britain.”

During last month’s lockdown of car manufacturing in the UK, carmakers instead manufactured more than 700,000 pieces of personal protective equipment (PPE), including face shields, visors and gowns, to support UK’s healthcare workers, according to the SMMT.

Nonetheless, the lowest monthly car output since Second World War drove year-to-date production down by 27.6%, with 121,811 fewer cars built than during the same period a year earlier.

The SMMT said that the 197 vehicles which were produced were premium, luxury and sports cars that had been assembled prior to shutdowns with only required “finishing touches” prior to delivery.

It added: “Although the UK’s 168,000 automotive manufacturing employees are now starting to return to work, with around half of the country’s car and engine plants set to be operating by the end of May, factories  are scaling up production along different timescales and, with strict social distancing measures in place, output initially will be restricted with a predicted loss of up to some 400,000 units by year end, compared with the January outlook, and a cost to industry of up to £12.5 billion at factory gate prices.”

Car retailers’ showroom re-openings on June 1 could not come soon enough for many OEMS.

Speaking to the BBC’s Newsnight programme earlier this month Vauxhall managing director, Stephen Norman, revealed that he was keen to get car retail back up and running.

“The key factor in the ramp-up (of the automotive sector) is the ability of car dealerships to re-open to customers so that we can take new orders to support the production that we make here,” he said.

And while Mazda UK sales director, Peter Allibon, was keen to exercise caution on the behalf of his retailers during the retrun-to-work phase, he told an interview with AM: “Our business is about building and wholesaling. At the moment we’re building few and wholesaling none. It’s a big drain on cash for us.

“Our immediate response has been to support the dealers, though, because we need them. They are our lifeblood. But there comes a point where we need to reactive things.”

Responding to today's car manufacturing data, Seán Kemple, the director of sales at Close Brothers Motor Finance, looked to the "good news" that "the ice is thawing, and staff at some UK manufacturers returned to work in May".

He added: “The car industry needs to be a focus as we move out of lockdown. More than half of dealers (53%) have called on the Government to offer more support to car manufacturers, and there’s certainly an opportunity to ‘build back better’.

"We may well see accelerated demand for alternative fuel vehicles (AFV), as well as for private cars in general if public transport becomes less appealing following the pandemic; in the short term, a scrappage scheme could jump-start the sector and replace older, more polluting models.

"And with the new 10% tax on EU-imported cars likely coming into play in 2021, UK plants will need to be equipped to meet even higher demand as we look to the long term.”