Was this article useful?
40 people found this useful

BMW and the Volkswagen Group have been fined €875.2 million (£751.4m) by the European Commission after forming a cartel with Mercedes-Benz owner Daimler to limit the potential of emissions reducing technology.

The German car makers were found to have conducted regular technical talks over a period of five years in which they colluded on their application of Nitrogen Dioxide-cutting AdBlue systems in their vehicles.

The Commission said they “colluded to avoid competition on cleaning better than what is required by law despite the relevant technology being available”.

It added: “More specifically, Daimler, BMW and Volkswagen Group reached an agreement on AdBlue tank sizes and ranges and a common understanding on the average estimated AdBlue-consumption. 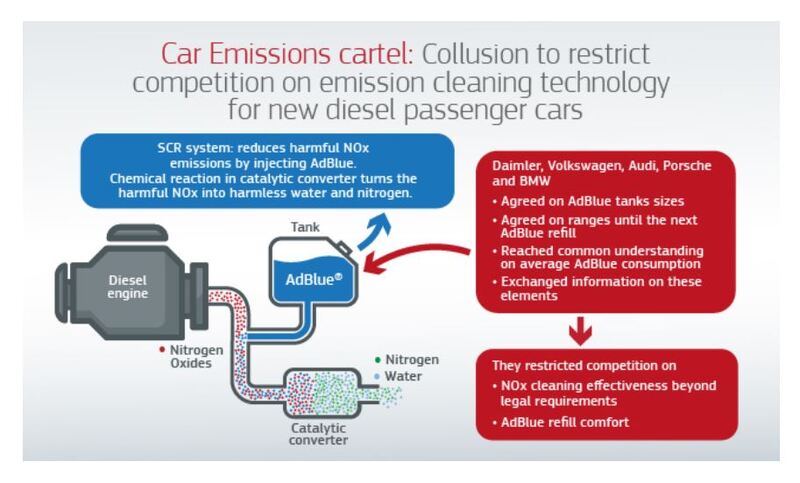 “They also exchanged commercially sensitive information on these elements.

“They thereby removed the uncertainty about their future market conduct concerning NOx-emissions cleaning beyond and above the legal requirements (so called “over-fulfilment”) and AdBlue-refill ranges.”

As whistle-blower in the case, Daimler avoided a potential fine of €727m, a statement issued by the commission revealed.

It said that an additional reduction was applied for all parties given that this is the first cartel prohibition decision based solely on a restriction of technical development and not on price fixing, market sharing or customer allocation.

The amount of the reduction of 20% takes into account that this type of conduct is expressly prohibited by Article 101(1)(b) of the Treaty, it said.

Speaking after yesterday’s (July 8) settlement hearing, the executive vice-president of the commission, Margrethe Vestager, who was in charge of competition policy, said: “The five car manufacturers Daimler, BMW, Volkswagen, Audi and Porsche possessed the technology to reduce harmful emissions beyond what was legally required under EU emission standards.

“But they avoided to compete on using this technology's full potential to clean better than what is required by law.

“So, today's decision is about how legitimate technical cooperation went wrong. And we do not tolerate it when companies collude. It is illegal under EU Antitrust rules.

“Competition and innovation on managing car pollution are essential for Europe to meet our ambitious Green Deal objectives. And this decision shows that we will not hesitate to take action against all forms of cartel conduct putting in jeopardy this goal.”

BMW, Daimler and the Volkswagen Group may have opened the door to damages claims with the resolution of the cartel case this week.

The official statement issued by the European Commission said that “any person or company affected by anti-competitive conduct as described in this case may bring the matter before the courts of the Member States and seek damages”.

Damage to consumer trust in the brands could have a far larger impact, however.

Commenting on the case Julia Poliscanova, senior director for vehicles and emobility at T&E, said: “Carmakers cannot be trusted to clean up cars. First they cheated on emissions tests, then they colluded to delay cleaner vehicles even though they had the technology.

“Only an EU target to switch to 100% emissions-free cars by 2035 will be enough to decarbonise by mid-century and avoid climate catastrophe.”