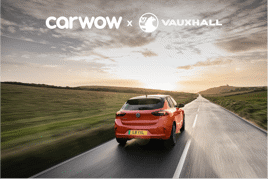 Carwow and Vauxhall have further extended their strategic partnership for the remainder of 2022.

The goal of the partnership, which started in 2019, is to drive growth in its share of electric vehicle (EV) sales by reaching new audiences via the Carwow marketplace.

The two parties have worked together on a range of activities including media, content, and retail network development.

Carwow said Vauxhall continues to subsidise most of the enquiry cost for its retailers on the Carwow platform and will extend this for the remainder of 2022.

Clare White, head of marketing communications at Vauxhall, said: “Carwow has proven to be a key partner for us in not only reaching a new audience for the Vauxhall brand, but also working with us to deliver exciting and engaging content for our new product line up.

“The results of the partnership are clear, with the vast majority of our dealers now using Carwow and converting leads to sale at an impressive rate of over 28%.”

Carwow said Vauxhall has seen more than 82% of enquires coming from within 50 miles of retailers.

Vauxhall has recorded a year-to-date EV mix of 48%, which has been driven by the brand's investment of targeted electric campaigns on the Carwow platform for its Corsa-e and Mokka-e line ups, said Carwow.

Sepi Arani, commercial director at Carwow, said: “It’s been a pleasure to support Vauxhall in its transition to become a leader in EV’s within the UK market.

“The team at Vauxhall have consistently taken an open-minded approach, challenging the norms in both where and how to reach consumers and effectively blending their focus on both their own digital assets and footprint alongside that of key third party platforms as part of the consumer journey.

“The Vauxhall retail network has also whole heartedly adopted working with Carwow - ensuring a seamless experience across each channel that consumers reach them through.”

Carwow recently reported it saw a 113% increase in the proportion of consumers who place a formal enquiry for a used car after initially searching on the platform for a new car.

Carwow has also continued its recent leadership recruitment drive with the appointment of Cupra and Seat UK commercial marketing manager Alistair White as its new head of sales.

An “exciting and ambitious phase of growth” had prompted Carwow to strengthen its leadership team, including Arani.