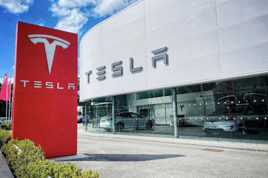 Tesla has opened the doors to its new Bournemouth electric vehicle (EV) store after completing its move into Inchcape’s former Porsche Centre in the Dorset town.

It is the second dealership opening for Elon Musk’s EV brand in a matter of days, following the expansion its physical car dealership footprint with the opening of a new store in Holden Group’s former Kia showroom in Norwich.

AM reported in February that Tesla had made a planning application to adapt Inchcape’s former Porsche dealership in Bournemouth as the AM100 car retailer moved to its flagship new Destination Porsche Centre at Wimbourne.

Prior to last week’s opening of the new Tesla site, potential customers’ nearest Tesla showroom was in Winchester, almost 40 miles away.

The new facility provides space for around 90 vehicles, plus some 10 cars inside the showroom, and it has an eight-bay workshop plus valeting facilities.

Upon filing its planning application earlier this year, property agent Knight Frank noted that the surrounding area of Ferndown is a large and affluent town within East Dorset.

Back in 2019 Tesla founder Elon Musk announced that the OEM would close all its retail sites in favour of an online-only sales model.

But six new Tesla locations were opened across the UK in 2020 after a dramatic u-turn on the plan, with new showrooms appearing in Newcastle, Winchester, Gatwick, Belfast, Birmingham and Chelmsford.

Since then the brand has grown its UK network to a total of 29 locations, supplemented by a customer collection depot in Southampton.