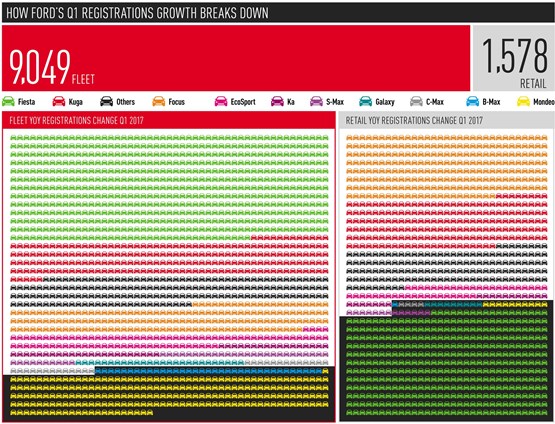 Despite warnings of an overall market decline this year, new car  registrations were up more than 48,000 units (6.2%) in the first quarter of 2017, compared with the same period  last year. This may be due to marketing campaigns highlighting the chance to beat the arrival of the new VED regime. However, just five brands accounted for 80% (38,896) of the increase.

There were 12 brands whose Q1 registrations fell year-on-year. The five that suffered the largest decline caused a 17,999-unit deficit. Four of those five brands were within the same carmaker group.

Out in front were Ford, with a 10,627-unit increase, and Nissan, up 9,507. However, the mainstream brands were not the only ones on the up – the third-largest growth was achieved by Mercedes-Benz, up 7,598 cars, and Land Rover’s registration volume increased 5,621 units. That result was narrowly ahead of fifth-largest grower Kia, up 5,543.

As the graphic above shows, Ford’s biggest source of growth was in fleet, up 9,049 extra cars. The Fiesta, due for replacement this year, represented 4,998 of those, and as the majority registered were petrol Fiestas, it suggests there were plenty of discounted sales to rental and bodyshop courtesy car channels. In contrast, Fiesta volumes declined in the retail market by 3,120 units – Ford’s retail growth of 1,578 extra cars came mostly from the Focus, Kuga and EcoSport.

That was a good thing, according to Andy Barratt, Ford of Britain chairman and managing director. He said: “Ford’s long-standing market leadership is being consolidated by the strength of our more profitable retail sales and is testament to our continued investment in exciting products and industry-leading technology that customers are choosing.”

Nissan also increased its fleet registrations, which accounted for 8,530 of its total 9,507-unit rise. Qashqai and X-Trail accounted for the biggest rises of 3,378 and 2,837 respectively, while Micra’s 2,305 registrations were treble its Q1 2016 performance.

Nissan’s modest retail growth of 977 units was largely due to Juke and the Leaf EV, whose combined 2,734-unit gain offset a 33% drop in Qashqai retail orders.

At Mercedes-Benz, only its E-Class, CLA-Class and SLC-Class registrations did not increase in Q1. Its broad rise perhaps demonstrates that it was cautious not to put too much stress on any one model range. The 7,958 extra cars split into 4,904 units in fleet and 2,694 units in retail, and the C-Class range led the volume charge in both markets, with 1,923 more registrations in fleet and an additional 2,752 in retail. Its entry-level A-Class held flat in retail, but grew in fleet by 1,145 units, while its B-Class slipped slightly in fleet (by 74 units) but made up for it in retail, with a 365-unit rise.

Land Rover’s growth was strongest in fleet (an extra 3,197 units, more than half its total increase), however almost 60% of all its 29,739 Q1 registrations were in the retail market.

Kia achieved gains of 1,578 in the retail market, as the Rio hatchback gained momentum since its February launch and the Sportage SUV’s popularity continues. However, that performance was outweighed by a 3,965-unit boost to fleet registrations, where every model line posted an increase.

Interestingly, while Toyota wasn’t a top performer for overall growth, it was the strongest brand in retail in Q1, up 3,036 cars to 20,346 retail units.

Its success was achieved by what appears to be a balanced approach, making relatively small gains in almost all of its individual product lines, especially Verso (up 559 units), Auris (up 261 units) and Rav-4 and Prius (up 175 and 172 units respectively).

Coinciding with PSA Group’s decision to buy Opel/Vauxhall, it seems abysmal timing for the group’s enlarged family of Peugeot, Citroën, DS and Vauxhall to all suffer a decline in Q1 trading.

SMMT data shows 5,362 of Vauxhall’s overall 8,299 decline in registrations were in the retail market. This could bring worry or joy to Vauxhall dealers, depending on their outlook. Those who have been flooded with pre-registrations and other nearly-new stock as the carmaker pushed cars into the network in 2016 may welcome some relief. However, its drop in market share to 8.1% may concern those already uncertain as to what strategic change its new French owners may bring.

Those French owners are already facing their own challenges. Peugeot’s UK registrations drop spanned every model line except its 2008 and 3008 crossover SUVs. In the retail market, its volumes actually increased by 544 units thanks to the 3008, ensuring retail share held flat at 3.8%. However, its fleet registrations dropped 3,142 as only the 2008 achieved a positive result.

DS registrations slumped in both the fleet and retail markets – the former by 1,249 units and the latter by 701 cars. The DS4, launched only 18 months ago, declined by two thirds overall to 304 units after volumes plunged 80% in fleet and 38% in retail.

There was some good news for Citroën dealers, however. Its Q1 decline was purely in the fleet market, where it lost 3,130 registrations. Its retail performance was actually up 510 units from Q1 2016, at 9,069 registrations, thanks to strong demand for the new C3.