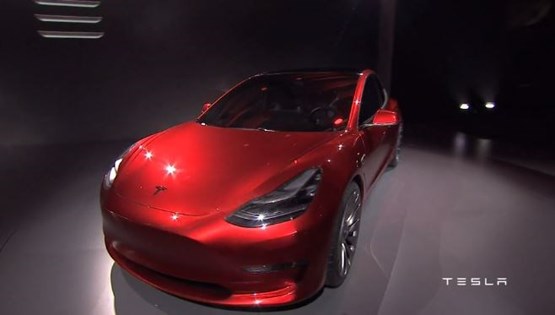 Tesla has delivered the first batch of its entry-level Model 3s but the company is facing considerable production challenges to meet consumer demand.

Last month Tesla founder Elon Musk announced a bond sale which would aim to raise £1.15bn to boost the manufacturing effort to meet demand and conceded at the car's launch that there will be "production hell" as it aims to ramp-up production from 5,000 cars a week this year to a total volume goal of 500,000.

AM has spoken with dealers, residual value setters and customers to gain views on the Model 3’s potential to become a volume challenger in the UK.

The California-based manufacturer has said it has over 500,000 pre-orders and customers have put down £1,000 deposits.

Estimates from the pre-orders suggest around 11,500 are from the UK, the second highest level in Europe.

If Tesla was to deliver that many cars into the UK, there would be more Model 3s on UK roads than all other pure EVs bought last year combined.

If the Government continues to push its air quality agenda and actually boosts investment in infrastructure, the Model 3 could arrive at just the right time.

The Model 3 is lauded by the mainstream press as Tesla’s first volume car and it’s a brand that has ruled out partnering with dealers for sales and aftersales.

But does the launch of Model 3 mark the beginning of Tesla taking volume out of the new car market at the expense of UK dealerships?

Lookers has six Nissan dealerships across the UK and these showrooms sell the UK’s electric vehicle market leader, the Leaf.

McMinn said: “Tesla is breaking new ground and it is to be applauded. You can’t help but take an interest.

“The OEMs will be watching Tesla very carefully and they are working furiously on areas like range and autonomy to close the gap.”

McMinn said that while it is inevitable the Model 3 will conquest some sales from Leaf, he believes the calls of the Model 3 being a volume player are premature.

He said: “When you look at the price of the Long Range edition at $44,000 and then add on optional extras like Autopilot at $5,000 it’s no longer a straight shootout with something like the Leaf. Buyers are still likely to be early adopters with plenty of money.

“We’re also yet to see how things line up with residual values and for funding options like PCP. The figures are pretty strong for Leaf on a PCP at around £200 a month.”

McMinn said that even if Tesla can deliver 10,000 cars into the UK market, which is a “ballsy target”, he said there is still room for the total EV market to grow to accommodate the increase in what would still be a small segment of the total 2.6 million new car market.

McMinn said it’s possible Tesla’s 19 stores could handle the projected sales volumes, but Tesla’s network of 10 service centres stretched across the UK may struggle as thousands of customers have cars on the roads.

He said: “With the number of cars they’re talking about producing, to do so with no quality issues seems like a bit of a long shot.

“Customers may have to drive to a dealership that is further away than the car’s total potential range.”

Jowsey said the Model 3’s success would all come down to price and volume. UK prices are yet to be confirmed and they are not necessarily going to reflect the $35,000 price tag in the US.

While there may be over 10,000 pre-orders in the UK, Tesla is unlikely to pump all that volume in one go.

Jowsey said: “We will get the next-generation Leaf before Model 3 and I think it will move the game on and make some real progress with mainstream customers. The Leaf, BMW i3, Renault Zoe and Hyundai Iconic have a head-start on Model 3, so for pure EV, it’s their market to lose.”

The new Leaf is expected to have more accessible styling, a range that matches the Model 3 and is likely to be priced at a lower level than the Tesla.

Jowsey said: “If the Leaf pushes the game on it could actually make it easier in some ways for Tesla to gain a foothold if average buyers are more prepared by the time production arrives in the UK.”

He said the $1 million question was on how quickly the EV market in the UK will grow and whether there is enough room to accommodate the Model 3 and the rest of the pure EV rivals on the market.

The Government has been pushing the pure EV agenda to the forefront of consumers’ minds, despite the relative weakness of its aim to have all new vehicles zero emissions capable by 2040 (something the majority of industry commentators believe will happen long before then anyway).

Jowsey said the $44,000 Long Range version of the Model 3 is more likely to be up against plug-in hybrid rivals from BMW, Audi and Mercedes.

He said: “A lot of corporate buyers will be spending similar money and so the Model 3 could very much be a disruptor model.

“Although, Tesla will need upgrade interior quality if it wants to compete with German premium in Europe, something it did with the Model S when cars arrived here.”

Freeman said the Model 3 launch was more like something you would see from Apple at the launch of a new iPhone.

He said: “Tesla is as much a tech brand as it is an automotive one and it has strong consumer pull.

“There has been a huge buzz. EVs are still a very small niche of the total car parc. However, because of the buzz around the brand Tesla may find itself as a good first step for those considering an EV for the first time.”

Freeman said that while practicality does come into a car buyer’s consideration, buzz around a car can go a long way.

He said: “Tesla is recognised as the EV brand and so they have a visibility advantage. The real challenge will be convincing joe public, rather than just the early adopters.

“It would be very interesting to see what cars the customers that have pre-ordered are coming out of. How mainstream are these customers out of the thousands of pre-orders in the UK?”

Freeman also said the Model 3 is up against a big challenge to compete with manufacturers that have experience producing vehicles for over 100 years.

C&C Taxis runs a fleet of Nissan Leafs for its business in the south west of England. Owner Michelle Williams watches the plug-in car market closely for new product and innovation.

She said: “As much as the initial hype about Model 3 sounds promising we are quite skeptical whether it will be cheap enough for the UK market.

“People keep comparing the US price of the M3 to the UK market by just quoting the equivalent price in pounds.”

Williams points out that RHD deliveries won’t start until 2019, which is a whole year after new Leaf has arrived in the UK.

Williams said there is the fear that with new models like the Model 3, that there will be teething problems, which is something Nissan has more experience in with a seven-year head start.

Williams said: “I think C&C will stay with Nissan because the franchise has good aftersales and a bigger dealer network.

“We still think Model 3 will be a niche vehicle because of price and the move by Tesla to charge for supercharging. Although we have our own rapid chargers the nearest supercharger is over 80 miles away.”