Used car prices registered their first month-on-month decline in eight months during November as diesel cars declined by an average of £143 month-on-month and petrol cars generated a £55 rise, according to market data issued by Auto Trader.

Overall, prices remained 6% up on the same point in 2016, with diesel vehicles maintaining a 3% increase in prices year-on-year, however, as petrol vehicles rose 11%. 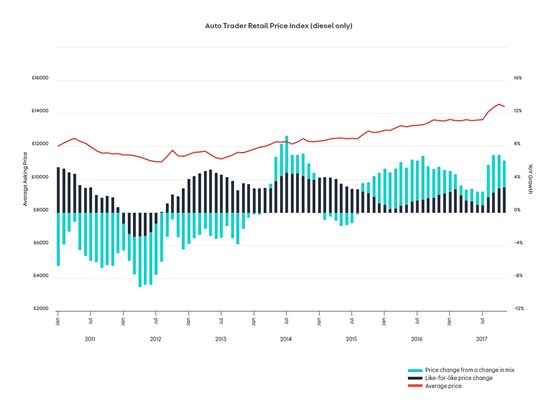 Karolina Edwards-Smajda, Auto Trader’s retailer and consumer product director, said: “The negative rhetoric surrounding diesel, which has been fuelled by the government’s recent announcements is undoubtedly contributing to the decline in new and used car sales and has impacted used car prices in November.”

Auto Trader said that data taken from its marketplace, which attracts over 55 million cross platform visits each month, revealed that diesel remains the most searched for fuel type despite a fall in registrations revealed by the Society of Motor Manufacturers and Traders (-30.6% in November) earlier this month.

Since November 2016, the number of searches for diesel cars has steadily declined in line with negative commentary; falling from 71% to a low of 54% in May 2017.

However, since then this decline has started to reverse, with diesel searches gradually rising to 56% of all fuel related searches in September.

This figure remains flat, accounting for 55% of all fuel searches in October and November respectively.

Searches of petrol represented 41% of all fuel searches in November, remaining consistent from October when they accounted for 40%.

Edwards-Smajda added: “Although used diesels have been showing much greater resilience, with their value continuing to increase year-on-year, as well as remaining the most searched for fuel type on our marketplace, the Index does show a small month-on-month decline for the first time in eight months.

“It’s too early to tell whether this is an emerging trend or not, so we will continue to monitor prices closely.”