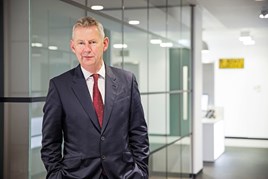 A specially-commissioned AA Populus poll of 10,293 drivers has revealed that 35% of motorists expect to own an EV within the next ten years – with younger drivers leading the change.

AA president Edmund King suggested that there remained too many barriers to many motorists early adoption of electric vehicles (EVs) as he drew on the findings of the poll during a keynote presentation to the LowCVP annual conference yesterday (July 12).

However, King suggested that car retailers should be ready to embrace the shift as advances in electrified vehicles bring consumers greater choice and an improved driving range.

“Massive savings can already be made on running and service costs, as well as, the tax benefits.”

King revealed that 85% of respondents to the AA Populus Poll raised concerns about the number of public charging points in the UK, while 76% agreed that EVs range remained prohibitive.

Price was a factor in many responses to the poll, with 76% stating that EVs are too expensive, while two-thirds (67%) believed EVs take too long to charge and 67% thought there isn’t enough choice of Electric Vehicle models.

Overall almost one third (31%) said they would like to own an EV.

Asked when they actually expected to own an EV, 35% anticipated this to be within ten years.

King told yesterday’s conference: “In order to meet the Government’s Road to Zero targets a concerted effort is required to demonstrate the benefits of EVs and dispel some of the myths.

“The range, charging speed and charging point infrastructure are all on the increase. There needs to be a more concerted effort by us all to sell the benefits of electric vehicles. Drivers will also need to change their fuelling habits with the majority charging their EVs at night and then at their destinations.”

Although the AA Populus survey intentionally focussed on EV adoption, King said that plug-in hybrids were a positive stepping-stone to full EVs.

He added: “The EV revolution hasn’t perhaps taken off as quickly as we would have liked but now we have a firm commitment to the charging infrastructure, as well as, future-proofing houses, offices and strategic roads.

“There are now some exciting EVs on the market and many new and exhilarating models on the horizon. The younger generation in particular are ready to embrace the electric revolution.”

The Go Ultra Low campaign this week highlighted the pace of EV adoption, however.

It stated the first half of 2018 saw more than 28,000 new pure electric and plug-in hybrid vehicles registered to UK drivers, with one being registered every nine minutes.

Plug-in hybrids continue to drive growth with 21,922 registered so far this year, a 40% increase on 2017, but the number of pure electric and plug-in hybrid cars registered to UK drivers now stands at more than 161,000.

The numbers have been driven largely by London, with the South East region accounting for the greatest number of AFV registrations.

A total of 9,880 pure electric and plug-in hybrid vehicles were registered in the region in the first six months of this year, 36% of the total number.

Jesse Norman, Electric Vehicles Minister, said: “Our mission is for all new cars and vans to be effectively zero emission by 2040. That is why we are ensuring that the UK is the best place in the world to build and own an electric vehicle.

“The recently launched Road to Zero strategy sets out one of the most comprehensive support packages in the world for the transition to zero emission vehicles, including measures which will help enable hundreds of thousands of new chargepoints across the UK.”