January’s usual flurry of new car discounts appear to have failed to generate the “boost in fortunes” usually delivered by the first month of the new year, according to Rupert Pontin, director of insight at Cazana.

Here he gives AM his monthly insight into a used car market which has continued to drive ahead in what should be more positive times from a consumer confidence point-of-view:

January’s 7.3% drop in the number of cars registered in the UK was not only extremely disappointing but was also contradictory to the consumer and business confidence data, as highlighted in the charts below:- 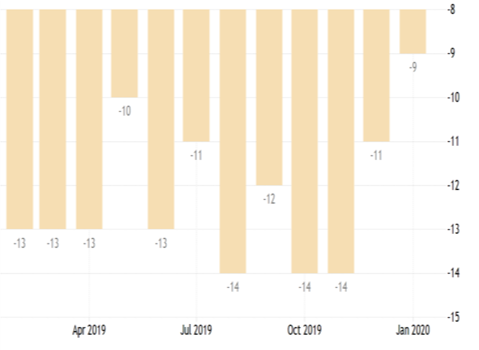 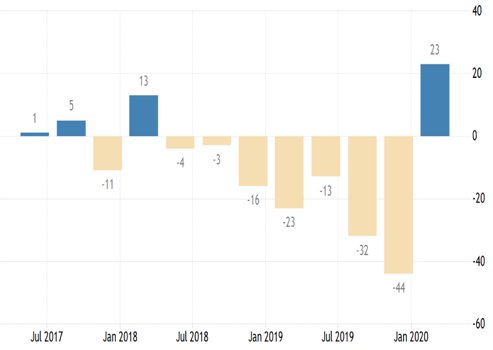 Both charts reveal that post-election and the installation of a conservative majority government, both consumer and business confidence has risen.

This also accounts for the fact that the public were aware that we would leave the EU on January 31.

This therefore lends credence to the belief that the January 2020 market decline is predominantly due to an inflated performance in December 2019.

It is wise to consider that for the first time the automotive industry just might be out of step with the rest of the economy, as it has been for much of last year, although this time to the detriment of industry.

From a used car market and pricing perspective, the chart below shows the performance of retail pricing as a percentage of original cost new in the market at key age and mileage profiles against the same period over the last three years. 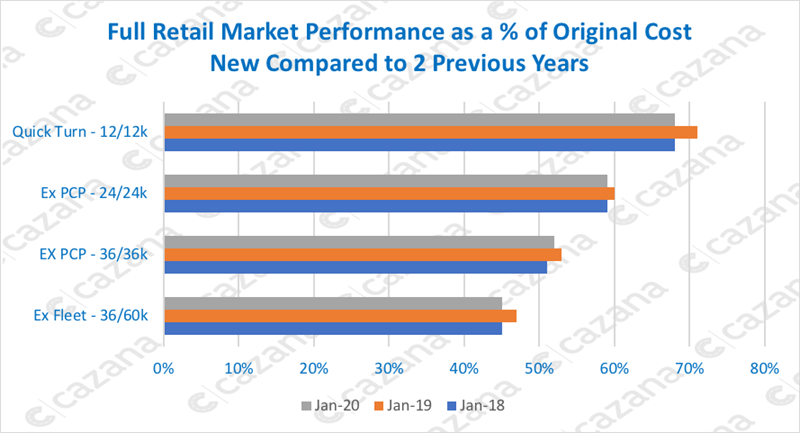 This chart highlights that in accordance with previous years, the largest decline in retail pricing was three percentage points, and this affected the quick turn market profile.

Given the high level of pre-registration activity in the new car market in December this should not come as a surprise.

This movement could be attributed to the high volume of new Fleet sale activity in December, as companies found some confidence to replace some of the cars that may have had extended contracts.

Perhaps the most surprising change is that there was significantly less of a price movement on ex-PCP product that had shown potential weakness as increased volumes came to the market.

The implication is that despite greater numbers the retail consumer was still keen to spend money on this profile of car, and hence a decent balance of supply and demand was maintained.

This may have been due to attractive finance propositions and the need to perhaps reduce expenditure following the expensive festive period.

On the basis that the largest price fall came from the plate market, the chart provides a clearer picture of where the problems lay: 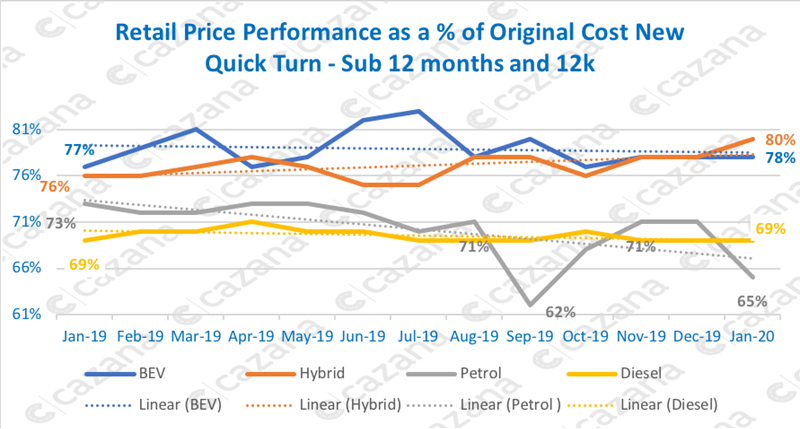 This chart clarifies where the pricing difficulties lay in January 2020 and reflects activity over the course of 2019.

First and foremost, it is important to acknowledge the performance of the new power types in the used market.

With the government announcing its aspirations to ban all fossil fuel sales by 2035, there is likely to be a greater focus on the Hybrid and BEV markets in the next few years.

It is crucial to acknowledge that the current level of residual value performance is unsustainable in the mid to long term.

Both these fuel types have behaved similarly over the course of the year which is good news.

Interestingly, hybrid pricing rose in January 2020 but it is likely to dip again in the near future.

The performance of diesel-powered cars has been consistent, which is as expected given the enormous drop in new diesel sales over the last two years.

A variance of just 1ppt in the last twelve months reinforces the belief that there is still ample used car demand for this fuel type.

This brings us to the performance of petrol cars, and the instability in pricing over the last six months.

There have been two major drops in the residual value performance in September 2019 and in January 2020. It is no coincidence that this has happened as both months were situated just after a significant period of pre-registration mandated by the manufacturers to cover the disposal of new cars to meet legislation.

There are too many petrol cars coming to the market and there is not enough consumer demand to take up the supply.

This reflects a lack of market understanding by certain players in the new car industry and a lack of quality insight to suggest that this might be the outcome.

At a time when residual value performance is so important, the use of data science driven data cannot be undervalued.

In summary, January has been an unusual time for the car market. Whilst a significant improvement in business and consumer confidence should have resulted in, at worst, a stable new car market, the reality has been very different.

It will be fascinating to see what happens in the coming weeks where new cars are concerned, and the used car market looks set to remain fair after an eventful January.

February is sometimes a little slow as it is the run up to the new plate, and this period affects both new and used car demand.

However, given performance in recent weeks, we may be entering uncharted territory.