No carmaker was prepared for ‘such a large-scale crisis’, says Jato

Jato Dynamics has said that no car manufacturer was prepared for or expecting “such a large-scale crisis” after COVID-19 lockdown delivered a 78.1% April decline in registrations across Europe.

Just 292,600 vehicles were delivered to customers during April – a decline from 1.34 million a year earlier – as the market slumped to its lowest level since the 1970s, according to the market analyst’s data from the region’s 27 countries.

The result meant that Europe’s new car sales were the hardest hit out of the globe’s three key markets – China, USA-Canada, and Europe. 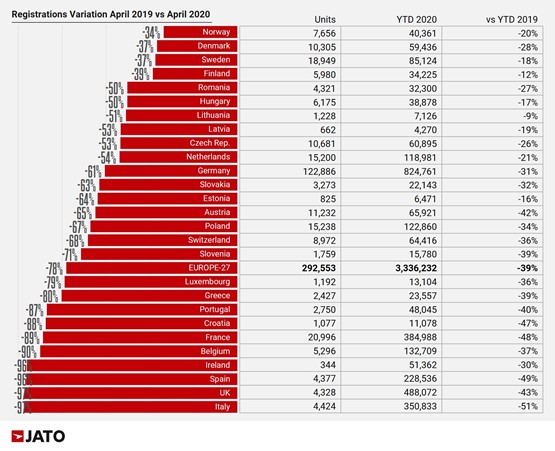 Felipe Munoz, global analyst at Jato, said: “Lockdown across the globe contributed significantly to the huge drop in registrations. Not a single OEM was prepared for this scenario or expecting a crisis on such a large scale.

“The only silver-lining from this turbulence is that it has created an opportunity for automotive players to reassess their operations and become more agile.”

Car retailers across the UK were able to re-open their showrooms to customers yesterday (June 1) and told AM that business volumes had been far greater than those of normal trading as pent-up demand among car buyers begun to pay dividends.

The pressure is now on to maintain that momentum.

The campaign begun within days of Jato's assertion that the European new car markets should expect a U-shaped recovery after being hit hard by the COVID-19 coronavirus outbreak in March, suggesting its recovery could be more protracted than that seen in China.

Jato’s analysis of market data from across Europe during April showed how lockdown measures caused registrations to fall at different times and different levels.

In Scandinavia, citizens were granted more freedom of movement, thus registrations fell by 37%, the lowest decrease.

In contrast, registrations in Italy, the UK, Spain and France tumbled from 646,000 units in April 2019 to 34,000 one year later as more stringent lockdown measures were imposed.

Signs that car manufacturers efforts to reduce their fleet CO2 emissions average in the face of strict new EU regulations – dictating a 95g/km average output in 2020/21 – had continued despite lockdown were in evidence despite stalled trading.

Jato reported that electrified vehicles (including hybrids and plug-in hybrids) totalled 50,400 units during April – accounting for a market share of 17%.

Munoz said: “EVs were already driving part of the small growth that remained in 2019. This year, as governments have acted quickly to protect their people and economies, EVs have gained even more traction and visibility due to incentives.

“These cars are likely to become the top choice for consumers seeking private transportation. OEMs who have invested heavily in EVs, are best placed to navigate the tough months ahead.”

Other key models such as the Tesla Model 3, Renault Zoe and Nissan Lead registered declines of 37%, 47% and 56% respectively.

Jato said that COVID-19’s impact was keenly felt by the B-SUV and C-SUV sub-segments due to their popularity in France, Italy and Spain, where stringent lockdown measures were imposed during the month.