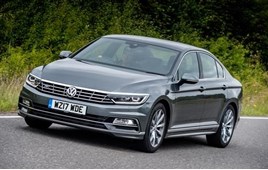 Car buyers heading into showrooms this September will be able to achieve discounts of up to 20% on a new car despite stock shortages resulting from the global semiconductor production crisis.

Data published from What Car? magazine’s Target Price mystery shopper market research showed that potential savings on a range of new vehicles from a range of OEMs – including Volkswagen, Renault Nissan and BMW – were greater than during the key ‘plate change month in 2019.

As businesses look to capture orders on cars that may not be delivered for some time, mystery shopper data showed the average new car discount is 6.4% or £2,694 – down from 7.2% at the beginning of the year.

What Car? editor, Steve Huntingford, said: “The new car market has been impacted by microchip shortages, which has stretched lead times on some new cars.

“While average discounts have fallen from a high of 7.2% in the beginning of the year to 6.4%, there are still some fantastic new car offers to be found for buyers who are willing to shop around.

“The discounts on offer, combined with pent-up demand in the market is hopefully setting up the industry for a more positive end of year.”

Seat was found to offer the highest average cash discounts across its model range, with a 12.1% saving on new models, followed by Suzuki (12.0%) and Renault (11.4%).

In percentage terms, Volkswagen is offering the largest individual saving, however.

Its Passat saloon attracts a cash reduction of 20% over the list price, according to What Car? data, saving £5,600.

Renault is offering the second highest discount, on its Zoe 100kW Iconic electric vehicle (EV), with a 17.9% cash saving.

All discounts are guaranteed for buyers through What Car?’s online New Car Buying platform.

What Car? found that diesel cars generally attract the highest average cash savings, with diesel models offered on average with a 7.2% discount, followed by petrol models with a 6.6% average discount.

What Car? reveals new car discounts ahead of March plate-change

What Car? reveals new car discounts ahead of March plate-change

Motorfinity partners with Ford to offer discounts to frontline workers

Motorfinity partners with Ford to offer discounts to frontline workers