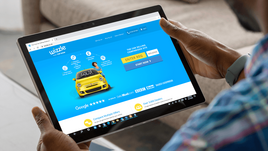 The growth in listings has been achieved in less than three months of launching its Sell Your Car service, according to Carwow.

The growth follows the integration of Wizzle into the Carwow customer experience.

John Veichmanis, chief operating officer at Carwow, said: “Our next aim is to exceed 10,000 cars and establish ourselves as a known alternative to traditional auction houses, with quality stock, a professional user experience, and market-leading, transparent fees.”

In August, Carwow recorded more than 20,000 offers from dealers across the country.

Wizzle has proved popular with owners of BMW, Mercedes, Audi, Volkswagen, said Carwow, and Ford vehicles and Porsche, Kia, Skoda, Tesla and Volvo vehicles have been the most sought-after among dealers, attracting the most offers per listing.

At the end of August, premium brands made up half of the vehicles on AUTOi, the back-end portal for Wizzle which dealers use to gain valuations and purchase vehicles.

Veichmanis added: “We’ve had a great response from owners of premium and prestige brands which have been the fastest to sell through carwow – especially BMWs, where there is a wealth of stock.”