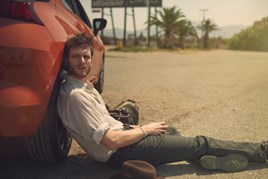 Nissan is hoping that customers will be on the run to showrooms to buy a new Micra following exposure to its Bonnie and Clyde-themed advertising campaign.

Launched across Europe this week, the campaign – dubbed ‘Meet the Accomplice’ – features a TV advert which focuses on the story of a young couple on the run. Their accomplice is the all-new Nissan Micra.

TV, radio, print media, social media, retail, digital and billboard advertsing are all part of the product push for the fifth generation Micra, with the exposure being rolled out across Europe through March, April and May.

“‘Meet the Accomplice’ is a campaign which emphasises this point – and reveals the new Micra’s personality – in a truly engaging and humanistic way. It’s also a new tone of voice for Nissan based on strong consumer insight.”

Nissan’s campaign launch timing coincides with the arrival of the Micra at Nissan retail sites across Europe.

More than 6,000 cars are now in showrooms and on forecourts, for onward delivery to customers and for demonstration drives.

At the all-new Micra’s launch in January Nissan’s UK managing director, Alex Smith told AM that the hatchback aims to re-establish itself inside the top 10 sellers in the segment, and compete head-to-head with the best and most popular in the class.