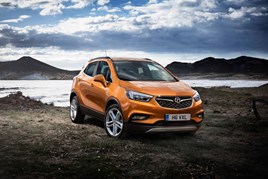 Vauxhall has stopped taking orders for its Mokka X compact SUV ahead of the arrival of an electrified replacement for the Nissan Juke rival next year.

Production of the brand's second biggest selling vehicle after the Crosa hatchback - Society of Motor Manufacturers and Traders (SMMT) data revealed that 21,868 had been sold to the end of October - ended in June, leaving the PSA Group-owned brand with no entrant into the burgeoning compact SUV segment.

Data published by Jato Dynamics today (November 28) showed a total of 484,400 SUVs were registered across Europe last month, as demand increased by 22% year-on-year and the segment posted a record market share of 40%.

Jato market analyst Felipe Munoz said Europe’s shift towards SUVs could be attributed to the growing number of small and compact SUVs entering the market, adding that compact SUVs now make up 79% of all SUV registrations in the region.

A Vauxhall spokesman told Autocar magazine that only existing dealer stock of the Mokka X is available and volumes are already running low, however.

The Mokka is Vauxhall’s oldest model, having been on sale for seven years and amassing more than 200,000 sales in the UK alone.

The Mokka X was refreshed in 2016 but it retained powertrains that pre-date Vauxhall’s acquisition by PSA Group.

Now only the Astra and Insignia remain on GM platforms.