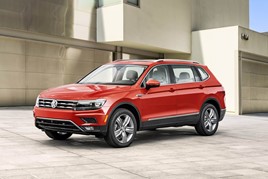 The UK was one of just three European nations to experience a decline in new car registrations the region’s delivered 8% volume growth during October – its best result during the month for a decade.

Data published by Jato Dynamic today (November 28) showed that the UK’s 6.7% decline during the post ‘plate change month was the smallest of the three nations to suffer a year-on-year fall in sales last month – Norway down 10.3%, Lithuania 11.5% - in a result which contrasted the fortunes of the majority of markets.

Registrations grew by 8% to 1.21 million units during the month as SUVs once again drove growth across the 27 markets analysed on a monthly basis by Jato, with a record 40% market share.

Its monthly report said that the strong growth could be partly explained by the market dropping in October 2018 following the introduction of WLTP, before revealing that the market still remains down 0.8% year-to-date, with 13,284,600 vehicles registered so far in 2019. 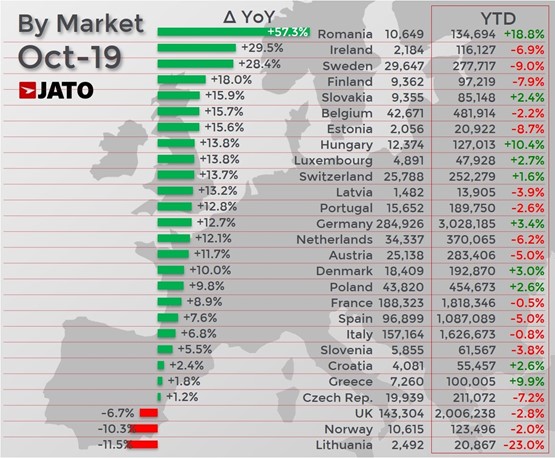 Felipe Munoz, Jato’s global analyst, said: “The European market is facing a myriad of challenges at the moment, but the biggest threats to growth are not having a significant impact on sales – at least for the time being.

“17 of the 27 markets included in Jato’s analysis posted double-digit growth in October 2019. It was a particularly good month for Germany, where demand increased by 13%.

“If the German market can continue to avoid a recession, then the state of the global industry might not be as bad as first expected.”

Consumer demand for SUVs and electrified vehicles (EVs) continued to growth during October.

A total of 484,400 SUVs were registered in Europe last month, as demand increased by 22% on the same period last year and the segment posted a record market share of 40%.

Munoz said that Europe’s shift towards SUV, which has brought it close to equalling the USA and China in terms of demand for such vehicles, could be attributed to the growing number of small and compact SUVs entering the market.

He said that more compact SUV now make up 79% of all SUV registrations in the region.

Demand for alternative fuel vehicles (AFV) increased by 79% for plug-in hybrid cars, 32% for pure electric cars and 29% for hybrid cars across the month, Jato reported.

Munoz said: “The results show that despite the high price of electrified vehicles, consumer interest is definitely there, and the latest market launches are being well-received.”

Volkswagen Group the sole winner of the month from a manufacturer point-of-view, accpording to the data published today.

“Volkswagen Group is more solid than ever thanks to the SUV offensive. In fact, one-in-10 vehicles registered in Europe is now an SUV made by the German group,” Munoz said.

Meanwhile, notable results from the brand rankings include Opel/Vauxhall and Fiat falling out of the top 10; Volvo outselling Nissan; Porsche outselling Honda; and Tesla recording a 129% volume increase to 2,093 registrations. 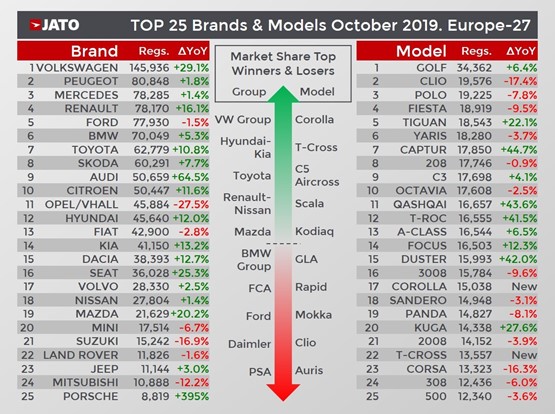 The model rankings saw the Volkswagen Golf occupy the overall top spot, while the Tiguan was the best-selling SUV.