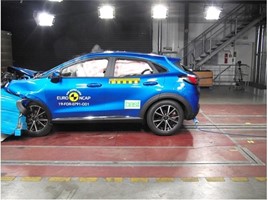 But it was not a clean sweep for high-flying OEMs and as Chinese electric vehicle (EV) manufacturer Aiways suffered a three-star result with its debut U5 SUV and the Volkswagen Group supermini triumvirate of VW up!, Seat Mii and Skoda Citigo also received three stars.

Euro NCAP reported that the new VW Golf hatchback had achieved the five full stars thanks to “excellent crashworthiness and standard fit of number of assist systems”.

The new Golf is the first ever Volkswagen to make use of V2X connectivity (vehicle to vehicle, vehicle to infrastructure) to enable advance hazard warnings – an important new technology that will be soon be included in Euro NCAP’s rating.

However, the Golf’s performance was not faultless.

It became the second successive VW tested by Euro NCAP to suffer a door opening in a side impact crash test, following tests conducted on the Sharan last month.

Euro NCAP said that VW is now looking into the root-cause of the issue.

The deletion of automated emergency braking (AEB) as a standard-fit feature of the VW up!, Seat Mii and Skoda Citigo took its toll in the most recent round of Euro NCAP crash tests.

The system was fitted when the cars were last tested in 2011, but its loss prompted the loss of two stars from each car’s overall rating.

Ford’s new Puma compact crossover was a resounding success in the tests, however, scoring high marks in all four categories of tests.

MG also had cause for celebration in a year which saw it match its 2018 registrations by September.

Euro NCAP said: “With an impressive equipment list and good performance in Euro NCAP’s tests, the cars are a match for many European, Japanese or Korean models.”

One of the compact SUV sector’s more established competitors, the Nissan Juke, also scored five stars in its second generation.

Less fortunate was the all-electric Aiways U5, the first car from the Chinese start-up to be launched on the European market and tested by Euro NCAP.

The SUV had problems in the side impact tests, losing all points for the side pole impact, and narrowly missed out on points for the pedestrian and cyclist functionality of its AEB system.

The disappointing result prompted a statement from the manufacturer. It said: “The Aiways U5 is the first electric vehicle from a Chinese startup to be tested by Euro NCAP.

“We are a young company, and will adapt and learn from these results. Euro NCAP found the U5 to be structurally safe, and we have already addressed and resolved the other issues highlighted in the testing.

“We expect the U5 to be among the safest mid-size SUVs available when it goes on sale in Europe next year.”

“Clearly the capabilities to engineer safe vehicles in China has leapfrogged over recent years, but the U5 example shows that meeting 5-star requirements can still be a hurdle for young companies.

“None of these issues however cannot be overcome and we look forwards to verify the cars’ performance when the shortcomings are effectively addressed”.